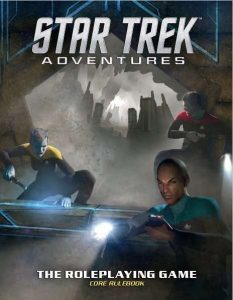 I’m also playing in a Shackleton Expanse-based campaign as the captain of the USS Alan Turing. This campaign is a few years old now.

I’m also interested in trying my hand a mapping/modelling.

In my copious spare time, I add features for STA Character Creator app. Check it out! It was originally created by azjeri / Christoffer, but I’ve done basically all of the updates for the last year or so.

Back in high school/university, I used to play the FASA Star Trek RPG. I really loved Star Trek, and therefore loved playing in the world. But, man, those were some awful rules. The combat rules were almost nonsensical. In the nineties, I ran a Star Trek game set in the TNG timeline, but I used the Hero system rules in place of the FASA rules, but I’d built up a campaign inspired by the FASA adventure “Decision at Midnight”. The players were a bunch of junior officers assigned to the USS Arkedelphia under Captain Ian Vellacora. But they were also headed to deep space, to complicate matters. The captain’s eccentric behaviour was only just starting to manifest itself.