I’ve been taking a new cartooning course, and our first project involves scripting and thumbnailing. So I’ve been thumbnailing over the past few weeks.

Ty always argued that thumbnails should take you 10 minutes. They take me quite a bit longer than that. I’m also weird in that I really like figuring out my lettering early in the process, ’cause I hate lettering that doesn’t fit into the panels.

Mostly my thumbnails start very scribbly, and then I refine them as I want to figure stuff out. Some parts I just leave as scribbly if I have a clear idea of what it’s saying. Stuff that involves a lot of environment, I end up spending more time on.

END_OF_DOCUMENT_TOKEN_TO_BE_REPLACED

September 13, 2014 BC Holmes Uncategorized No comments

Did I mention that I joined an art studio? There’s a cool bunch of folks who have a studio called The Comic Book Embassy. It happens to share space with the Comic Book Bootcamp, which is where I did all the most-recent comic book courses I took. At the beginning of the month, I joined the studio to give me a space to focus on my comic-creation.

Early September wasn’t the best time to do that, mind you. I’ve been tied up with the film festival, so I’ve barely had time to do more than just drop in to the studio and take a coupl’a items there. On Tuesday, one of my few nights without a film, I planned to drop some things off at the studio, but I was turned away by the police. They’d blocked off an entire section of Spadina Ave., which is a pretty unusual occurrence. They weren’t letting cars through; they weren’t letting people on the sidewalk; they weren’t letting people at the studio/bootcamp leave the building. This ended up being the subject of Ty’s Bun Toon this week.

At the time of the lockdown, there were numerous news stories about a sighting of people with a sniper rifle on the roof of one of the Spadina buildings. The situation ended around 10pm-ish, with the discovery that some kids were playing parkour and had a toy rifle. Nonetheless, news outlets don’t seem interested in clarifying just how non-threatening the situation was. 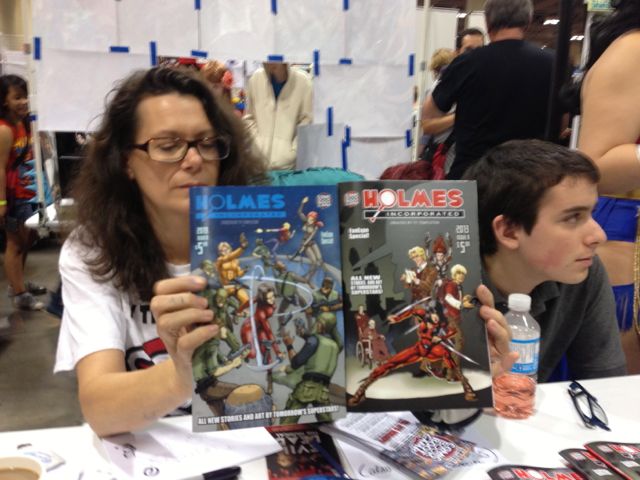 END_OF_DOCUMENT_TOKEN_TO_BE_REPLACED

Last night, was another Pitch Night. Each of the writers for the Holmes, Inc. class had to come with three pitches for a story. After we presented the three ideas, Ty would typically eliminate one of the three (but not in all cases) and then the class would vote on which of the remaining two pitches they liked better. As the night progressed, Keiren was also keeping a running tally of which characters were being represented to ensure the book had sufficient balance and coverage of the principal cast.

It was interesting to see the different styles that the creators brought to the table. Some people wanted big, bold stories with giant monsters and/or larger-than-life villains. Others wanted time travel, or alternate dimensions. Some stories were leaping off from stuff in a previous book (Book 3, in particular, ended with a cliff hanger). I can’t think of a single story that was pitched solely as a mystery. Partially, I think, the story-pitching session brought out people’s love of playing with comic book tropes.

Another thing that interested me was the way past classes had such a presence in the room. People in the room were fluent with a rich backstory of the universe that had come out through past iterations of this course: the history of the evil Chaos family, and the significance of the ARTI suits and so forth. I think I’m one of only a couple of people for whom this is the first time taking this class, so I was coming at this a bit new.

I was also the last one to pitch, so by the time I was pitching my stories, we’d already run the gamut of monsters and time travel. I’m sure that my ideas seemed banal in comparison.

END_OF_DOCUMENT_TOKEN_TO_BE_REPLACED

February 16, 2013 BC Holmes Uncategorized No comments

Your naiveté is so quaint.

Do you remember that part in “Letter from Birmingham Jail” where Dr. King talks about the difference between “negative peace” (the absence of tension) and “positive peace” (the presence of justice)?

No News is Good News

I’m loving my current class — a drawing course on heads, hands and faces. Over the last four weeks, we’ve been slowly but surely improving our understanding of these body parts.

END_OF_DOCUMENT_TOKEN_TO_BE_REPLACED

But one of my colleagues recently resigned — he’s one of the long-time folks, so there’s a do. At a sports bar. I show up because it’d be crass not to, but it’s basically a social event, and I kinda suck at those. I figure I’ll show up, put in twenty minutes of face time and then sneak away.

“You know that there’s no hockey on, right?” one of my colleagues says to me, to make conversation. I figure the sports-themed surroundings have infected him.

“Hockey. That’s the one with the sticks, right?” I reply, dryly. I’m accustomed to people rolling their eyes at me.