Thought for the Day

March 22, 2016 BC Holmes Uncategorized No comments

Today, the CBC called [Rob Ford] a “millionaire with a working-class attitude.” No. He was a millionaire who hated the poor. Like many other millionaires. If anything, Ford was a kind of Trump-lite, somehow seen as an “everyman” because he is so brave as to admit his bigotry publicly and proudly.

Certainly he did not support struggle of the working class, anti-union as he was. The CBC is correct that he became an “international celebrity for his drug and alcohol use while in office,” but he shouldn’t have been infamous for that reason. Rather, it should have been his treatment of women, people of colour, and the poor that brought him infamy.

He outright rejected the existence of homeless shelters, was overtly homophobic and racist, suggesting, in 2003, that Toronto be declared a “refugee-free zone.” Ford was charged with assaulting and threatening to kill his wife, Renata, in 2008 (though the charges were dropped), and in 2011 she reportedly placed a call to 911, with regard to a “verbal altercation” between herself and her husband.

— “On the death of Rob Ford and mourning abusive men”

The Mayor of Here

January 21, 2014 BC Holmes Uncategorized No comments 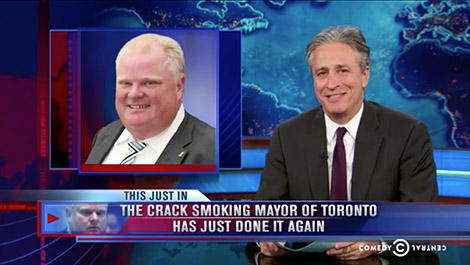 July 29, 2012 BC Holmes Uncategorized No comments

The ranked ballot system typically works as follows. Instead of choosing a single candidate, as they do now, voters are free to rank candidates in the order they prefer them. (A “1” for their favourite, a “2” for their second favourite, “3” for their third.) If a candidate gets a majority of first-place votes — more than 50 per cent — the election is over.