This year, I’m just gonna embrace the fact that TV is now so much better than most movies, and I’m gonna lead with that. 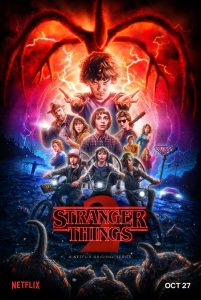 Number five: Stranger Things 2. The kids are back on their bikes and the upside down is still dangerous. Eleven has evolved from “pretty” to “bitchin’” and Steve turns out to be a pretty good baby sitter. The show was still fun, immersive, and creepy. I liked that we got to see more of the world, I liked how Eleven has tapped in to the Phoenix force, and I liked the evolution of many of the characters. Just about the only thing I didn’t like was Eleven’s jealous shunning of Max. A solid, fun show.

END_OF_DOCUMENT_TOKEN_TO_BE_REPLACED

What am I watching, lately?

Since the cancellation of Hannibal, Penny Dreadful has been my favourite show. Now it’s ended, too, and I am living in a universe made out of sad.

What’s it about? A group of characters in the 1890s — some are recognizable characters
from Victorian (and pre-Victorian) fiction, including Dr. Frankenstein and Dorian Gray,
and others are unique creations, such as Vanessa Ives and Mr. Lyle — have bonded together to fight monsters. Not post-modern, broody monsters, but classic Victorian “separated from God”-style evil monsters. The first season is about vampires, and the second season is about witches, and then the third season returns to vampires. But there are some devils and werewolves and reanimated creatures thrown in along the way. There’s rather a lot of blood and rather a lot of sex, but I’m okay with that.

The show has a number of qualities that appeal to me. It’s dark, and intense. It has a writing style that I just find to be sublime. At times, I think I love it just because I enjoy watching
Vanessa Ives’ intense expressions. One of the things I particularly love is the show’s
willingness to take extended amounts of time just building a particular feel.

There’s a sequence at the end of the first episode of the second season that illustrates
this well. Vanessa, who is essentially the show’s long-suffering hero, is praying. The show
touches on religion frequently, and Vanessa’s faith is an important element of her
character: it’s really the only thing that gives her succour. But the scene cross-cuts
between Vanessa, and the second season’s primary villain, a satanic witch who is similarly
engaged in incantations. The two scenes cut back and forth, rising in intensity. It goes
on for minutes, an amazingly long time to take for a story beat that does absolutely
nothing to advance the plot. But it sets the mood. It’s just about setting the mood.

END_OF_DOCUMENT_TOKEN_TO_BE_REPLACED

December 12, 2014 BC Holmes Uncategorized No comments

I’ve been watching Grey’s Anatomy on Netflix for a few weeks. I started watching it because I was in a funk of hate-watching Bones and I needed to stop.

I don’t love the Grey’s Anatomy, but I’m enjoying it a lot more than Bones. I find the soap-operatic qualities tedious, but I enjoy many of the characters: especially Cristina, Callie and Arizona. Cristina is probably my favourite. I’m somewhere in the seventh season, now, and I’m tired of any storyline that distracts from Cristina-as-super-awesome. Because she’s super awesome.

You’d think I’d have stronger identification with Meredith, given her moody backstory involving fraught parental relationships, but I’m pretty meh about her. Give me Cristina any day.

December 27, 2013 BC Holmes Uncategorized No comments

2013 was a bit of a strange year for film, from my perspective. Whenever I think back on films I saw in a particular year, I’m always struggling with the knowledge that my movie-watching habits are skewed by the fact that I don’t tend to see much of anything in cinemas any more. So, for me, “films I saw this year” usually includes a handful of films that many people saw the year prior. And this year, a number of my top 5 come from the last quarter of 2012. Oh well.

Number 5: Looper (Rian Johnson). Yup, it suffered from wibbly-wobbly time stuff that makes no sense when you think about it. But it was surprisingly strong. I really enjoyed the vision of the future it created (clearly devastated by economic depression) — it felt like a fresher future and more interesting worldbuilding than I’d seen in a long time. The ending of the film came as a surprise (so many time travel tales are bogged down with the weight of oppressive inevitability), and the scene where Emily Blunt gets in the safe was such a wonderfully constructed scene.