Archive for BC Holmes

December 29, 2022 BC Holmes Uncategorized No comments

Okay. Now let’s do TV shows. There were a lot of good shows this year, but after several years of The Expanse being something that I adored, I feel like none of these shows really fit the bill. And it’s true that I could keep The Expanse in the list, as its last episodes aired this year, I mentally think of it as something from last year.

Anyway, here are my top five TV shows and a handful of also-rans.

Number 5: Yellowjackets. My friend, kalmn, categorized this, approvingly, as “grim, grim, grim and also lesbians.” And, yeah, that’s probably not inaccurate. Yellowjackets is a show that takes place in two time periods. In “the past” — the mid-90s — an airplane carrying a team of high school sportsball players (“Yellowjackets” is the team name) crashes. We learn (in scenes set in the present) that the kids were stuck in the wilderness for 19 months, and we know from the creepy opening scene that things go bad and there’s ritualistic cannibalism. But beyond that opening scene, we mostly don’t see the past storyline being too horrible (just horrible enough). In “the present” — essentially the current day — we follow four of the survivors, now adults. We’re clued in pretty early that although they were eventually rescued, they mutually agreed to a somewhat light-on-details story of how they managed to survive. One of the survivors is Misty, played by Christina Ricci, who is upbeat, cheerful, super resourceful but also clearly a sociopath. And as much as the other three adult survivors want nothing to do with Misty, Misty is not the sort of person who doesn’t get her way. Through the first season, we get to see the slow devolution of the community of high school students stuck in the wilderness. By the end, things are becoming bad but it hasn’t gone too far off the rails. But, like I say, we’ve had a peek at how bad it ultimately becomes. In the present, we’re seeing that none of the adult survivors are in a good place either. And there are lots of other characters from the past that we don’t know anything about: did they survive? Did they get eaten? It’s similar to the Amazon Prime series, The Wilds, but I enjoyed Yellowjackets a lot more. 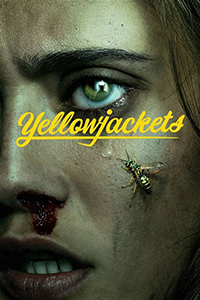 END_OF_DOCUMENT_TOKEN_TO_BE_REPLACED

December 27, 2022 BC Holmes Uncategorized No comments

I’ve fallen out of the habit of doing these round-ups since the panini started. But I want to return to it because it’s kind of fun thinking back over the last year’s media.

This year, I’m gonna break up my usual post into two parts: my favourite films and my favourite TV shows. Here we go.

Number 5: Nope. I confess that the earliest trailers for this film were largely incomprehensible to me. I had no idea what the film was about (except, broadly, horses and UFOs), and that didn’t particularly move me to seeking it out. But Sio suggested that we try it one night, and I was particularly struck by the relative originality of the story, especially in regards to the UFO element. I hesitate to say much more about plot, because part of the enjoyment, for me, was watching the various discoveries emerge. There were moments when I found myself pondering: “why does this particular side-story exist in the film?” but by the end was really satisfied with the cohesiveness of the film. I’m torn about the original trailers: on the one hand, I really enjoyed not having the trailers spoil the story beats for me, but on the other hand, I don’t think they did a very good job of enticing me to see the film.

END_OF_DOCUMENT_TOKEN_TO_BE_REPLACED

Thought for the Day

December 3, 2022 BC Holmes Uncategorized No comments

And Will loves New York? she asked.

He really does, I said. And he’s a Marxist now, I think. He just says Kapital, doesn’t even use the Das.

Miriam Toews, All My Puny Sorrows

November 20, 2022 BC Holmes Uncategorized No comments

September 26, 2022 BC Holmes Uncategorized No comments

A link so that I can find this again:

August 28, 2022 BC Holmes Uncategorized No comments

I watched a coupl’a movies the other night. The first was The Lost Girls. It was pretty bad. But it was the $0.99 movie rental on Apple Movies a week or two ago, and I rented it. The premise was that multiple generations of girls from Wendy Darling’s family are visited by Peter Pan. Or maybe not. Maybe Peter’s just a metaphor for mental illness. It’s not entirely clear. The person who wrote the screenplay (adapted from a book) and directed the film also starred as the main character. And I don’t think that was a great choice.

But the other movie I watched was Being the Ricardos — an Amazon Studios film available through Amazon Prime. And that was amazing.

This latter film was written and directed by Aaron Sorkin. And while I sometimes think that Sorkin’s stuff can be a little infuriating — for example, I think The West Wing is a very facile and idealistic view of the way American politics works — I love how he writes dialog.

He writes the characters smart and able to express themselves. Throughout the film, characters are juggling multiple crises: rehearsing and filming an episode of I Love Lucy (with a director that Ball doesn’t really have confidence in), dealing with a question of whether or not Arnaz has been unfaithful, trying to quash a news report alleging that Ball is a communist, and trying to persuade the studio that they should allow the show to incorporate Ball’s pregnancy as a storyline (I learned, years ago, that the studio didn’t allow them to say the word pregnant on TV; Lucy was, instead, “with child” or “in the family way.”) The characters are constantly jumping around from one point of conversation to another. In one scene, Arnaz chides Ball for jumping topics without warning and Ball admonishes him to keep up.

There was one distraction in the film: it positions Arnaz’s opposition to communism to be a result of the revolution in Cuba… but the story is set waaaay too early (1952/1953?) for that to make sense.

July 13, 2022 BC Holmes Uncategorized No comments

All My Puny Sorrows is beautiful, but tremendously sad.

Content warning: suicide is a major theme of the film.

But why aren’t their jackets yellow?

March 24, 2022 BC Holmes Uncategorized No comments

I’m late to the game with Yellowjackets, but it’s kind of exactly my jam. I think that probably says something unfortunate about me.

I think it worked for me quite a bit more than The Wilds, which I enjoyed but didn’t really love.

March 12, 2022 BC Holmes Uncategorized No comments

I’ve had my beefs with Discovery, but I count that as among the best episodes of Trek, ever.