1. What We Do With Shadows 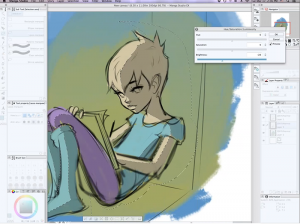 The first of the three isn’t really rocket science, but it was different than the technique I usually employ. At around 35:00, Cumbo starts working on shadows for the image he was sketching. My typical approach to shadows is to create a multiply layer. But Cumbo makes a bunch of selections (not that the “Sarah” figure is on a separate layer than the greenish background) and then does a colour adjustment using Command-U (presumably Control-U on Windoze machines) to bring up an HSB dialog which allows him to lower the brightness of the selected areas.

2. She Comes in Colours Everywhere

The second technique is one I’d love to hear more about because it was a technique that I’d never seen (do you know any other people who talk about a technique like this?)

At around 51:00, he does an adjustment to the colours to convey a particular emotion or feel.

The steps are straight-forward:

The end result is a somewhat subtle colour shift — the new colours are a bit warmer and a little bit more unified. 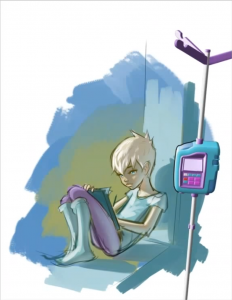 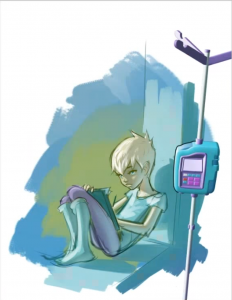 3. Soft! What Light Through Yonder Window

The last technique is a finishing technique, to soften and brighten the overall image. His demonstration starts at 1:08:45. Steps: 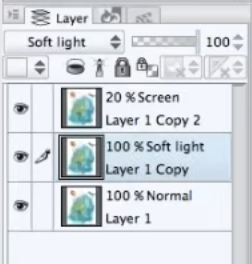 He also immediately follows that technique with an interesting glow technique that works very similarly, except that he uses “Add (Glow)” mode on the top layer, rather than “Screen”.