As I talked about in my post, “Pitch Night”, we were each asked to come up with ideas for a recurring series. Both Ty and the class narrowed the proposals down to a single proposal for each student. My “winning” proposal — the one the most of the class voted for — was the third one I described: the underground post-apocalyptic Communist bunker city about to return to the surface, 60 years after nuclear war. My current working title for this series is Red Exodus.

Part of the pitch process involved establishing some characters that the story would be about. I quickly came up with four key characters:

In my first story, I knew that I was gonna need to introduce all of these characters and establish the setting, but I didn’t want it to seem like dry introduction. I wanted some action/adventure. So I came up with some story elements, and started sketching out a story. 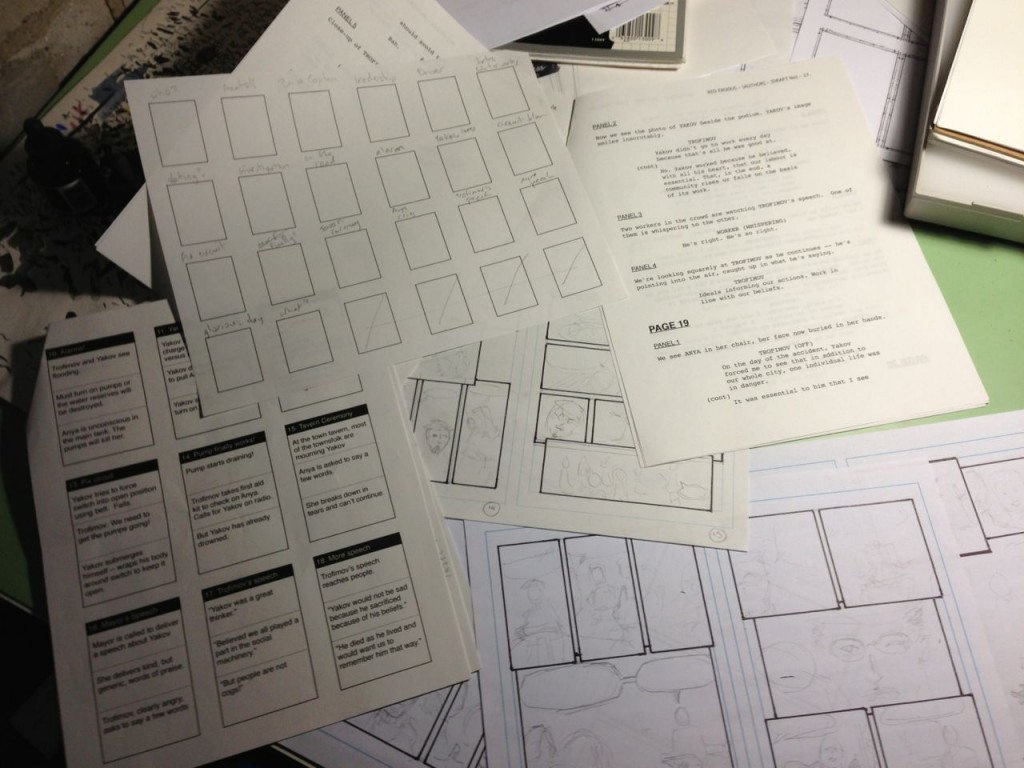 Ty taught us a particular approach to story-mapping: we started out with a simple page of rectangles (see upper-left-hand part of the photo) — each rectangle represents a single page in the final comic. For each page, we give a one- or two-word (or thereabouts) description of what’s happening on the page. Then, for each page, we break the page down into (usually) three story beats (like so). He always encouraged us to use pencils, but I work so much better with soft copies of things that I did this breakdown in Pages (Apple’s Word-equivalent).

Ty gave us some useful guidance about action/emotion/information that plays a role, here, and it’s interesting stuff, but I’m pretty sure I haven’t managed to get the balance right in my story. In particular, my story ends with about six pages of speechifying, so that’s kinda… unbalanced.

After that, we break down story beats to panels. For my part, I ended up with some really sketchy panel layouts in my sketch book. I didn’t end up breaking down all my pages this far; I concentrated on a coupl’a key scenes. But by this point, the story was demanding to get out of my head (in that “God does not want me to write, but I… I must write” kind of Kafkaesque way), so I ended up doing the whole script. Keener, keener!

By this point, we’d had class 6, and Ty foisted prologues on us. So I ended up re-thinking my opening scene. I moved a coupl’a scenes around, but I didn’t update my breakdown, since it way mostly re-ordering. But my story also went from a 20-page breakdown to a 21-page breakdown. I wrote out my full script in Scrivener.

Over the last coupl’a days, I’ve been playing with the story some more. Mostly, I’m working out the near-final layouts. Canson sells pads of “layout pages” which are pre-printed with scaled-down comic page guides in non-repro blue — they’re scaled version of the pre-printed comic book page pads that Canson also offers. For my part, I find the layout pages are too small for me to work with — each “page” is less than an 1/8th of an 8 1/2″ x 11″ page. That’s too small for me. In the past, I would measure out my own layout guides in my sketch book at half-size. When I go to do the final layouts on boards, I double all of the dimensions.

I’ve recently decided to see what tasks I can simplify in my process, though. So I decided to pre-print my own layout guides. I put together my own layout guides and printed some on standard letter-size paper. That’s made it faster to do layouts because I’m not remeasuring the same rectangles. I kinda liked having my layouts in my sketchbook because then I always knew where they were — loose sheets of paper are the bane of my life. But it’s hard to argue with faster.

Anyway, the part that really interests me is that using Ty’s recommended method, I got to a complete story in a surprisingly short amount of time. I’ve written comic pages for other classes I’ve taken, but nothing longer than about 5 pages for a single story. I have a handful of partially-written scripts for pet projects, but I often fail to finish them because I waffle about what’s gonna happen in particular scenes. This story-mapping approach seemed to cut through the waffle-effect (which is one of the benefits that Ty claimed).

So. Net result: two courses that, together, ran for a total of fourteen weeks. At the end of that time, I have my first 21-page comic script. And, really, the actual execution happened in the last two weeks. Not bad.