I’ve certainly had no luck with any of the searches I’ve tried in various online databases. But I decided to hire a professional genealogist to see if anything could be discovered. Several days ago, I received their report. And while they have also failed to find any definitive records, they did uncover some clues that might tell us a thing or two. But it’s in the realm of speculation, rather than “clear record.”

There are a number of Canadian clues that suggest that the family originated in County Cavan, Ireland. Andrew Holmes, my ancestor who died at Grosse Ile, has a death record that indicates that he was arriving from County Cavan. His wife, Susannah, who died years later, has a headstone that describes her as a proud resident of Co. Cavan. And the death certificate of their son, (my ancestor) Andrew Holmes (Jr.) describes him as being born in County Cavin [sic]. The only conflicting piece of information is that another son, Thomas Holmes, has a headstone that describes him as a native of County Fermanagh.

The genealogist that I hired was unable to find any surviving records for Andrew and Susan. The 1841 census for Cavan was destroyed in the fire, it seems. Civil registrations of major events didn’t start until April 1845 (and the family is on its way to Canada in the summer of 1845). Existing databases that store church records for Irish parishes also turned up nothing. Sounds like something of a dead end. She also checked for the names of the two married adult daughters of the family: Mary Ann and James Dowler and Margaret and John Stratton. Also nothing. The most likely conclusion, of course, is that those church records were also lost in the 1922 fire. 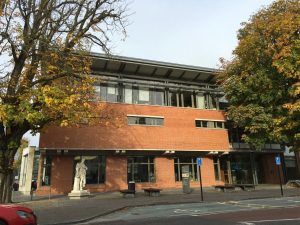 I’m not hugely surprised, I admit. When Siobhan and I went to the genealogical centre at the library in the city of Cavan, County Cavan, during our trip to Ireland, they weren’t able to turn up anything about the Holmeses. (The woman who worked there, oddly, encouraged us to go off to Cootehill, but didn’t explain why she thought there’d be more to find there. Cootehill was a bust).

One of the other lines of inquiry that I asked about was that, according to Those Irish Holmes’, James Dowler remained in Ireland when Margaret joined the rest of the family in Canada. Again, nothing clear emerges. But she did some analysis of the Holmes names according to a 1856/57 survey called Griffith’s Primary Valuation. From that, she gleaned two things. First, the Holmes name appears in 4 of the 36 parishes of County Cavan:

Secondly, there were no references to Stratton and just three listings for Dowler. The Dowler references are all in Templeport. Now, my family has left the country before 1856, but it’s not unreasonable to speculate that the families tended to stick in one place. It’s also not unreasonable to think that Mary Ann met James Dowler because he lived nearby. And so maybe the family originates in Templeport. She also noted that, according to the surviving 1901 census for Templeport, most of the Dowlers listed within were carpenters, and that Mary Ann’s children in Canada also became carpenters. Possibly a family profession?

And then she found one more thing: an interesting news clipping (which appears in a couple of papers), from January 1845. The news items relates to an incident involving the Molly Maguires: Wikipedia describes them as an agrarian/rural rebellious secret society that agitated for jobs for Roman Catholics. Here’s one version of the clipping:

THE MOLLY MAGUIRES – ON the night of the 6th instant (the date of Bawnboy fair), a party got up on the house of Andrew Holmes, of [Corrasmongan], tore up the thatch and straw, and carried off a gun, which was registered. On the same night a turf stack, the property of Charles MᶜHugh, of Comaghy, near Blacklion, was set on fire and consumed. On Thursday, the 9th, a threatening notice was served on Richard Gibson, of Boley, near Ballymagauran, requiring him to raise his servant boy’s wages to 2£ 5s. or they would punish him.

We don’t know for sure that the Andrew Holmes listed in the above article is my Andrew, but it is suggestive. The genealogist additionally argued that the effects of the potato blight wouldn’t be known until the autumn of 1845, so while it’s unlikely that the coming famine was the thing that encouraged Andrew Holmes and family to pick up and head for Canada, perhaps it was the rising conflicts with Molly Maguires that provided a bit of a push.

I did a bit of additional research on Corrasmongan, which is close to Bawnboy: there’s an 1851 property Census for Ulster Province that has survived and it lists some 1841 data. The book has been digitized by Google Books. According to that census, Corresmongan was an area of 8 houses, and a population of 49 people. By 1851, that drops to 6 houses and 41 people. The genealogist notes that Corrasmongan is about a mile away from Brackley, where Dowlers are recorded in the 1856 valuation. 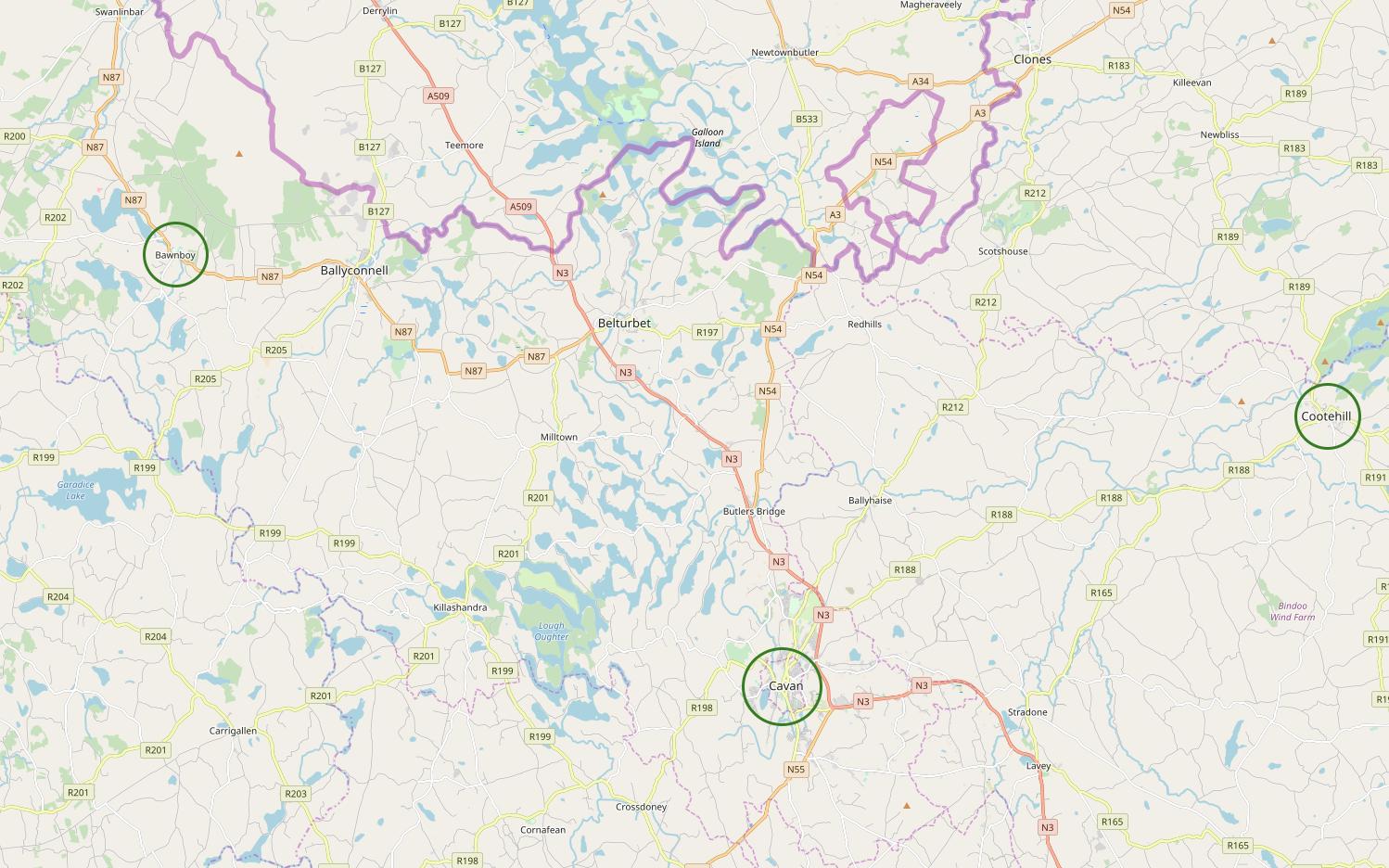 Another clipping talks about a similar incident involving a Henry Dowler of Drumcar (again, recall that Dowler doesn’t appear to be a common name in Cavan), which is apparently adjacent to Derrynacreeve, where the Dowler carpenters of 1901 live.

So what we have is a locus of references to Holmeses and Dowlers in a particular region of Templeport, north west of the city of Cavan. Again, not definitive, but very interesting. 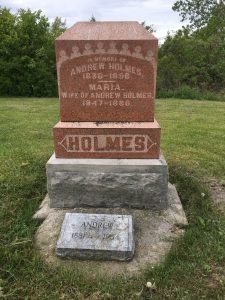 Another find I made recently was a write-up about Andrew Holmes (Jr.) in a book called Commemorative Biographical Record of the County of Lambton, Ontario published in 1906: the book is digitized by archive.org. The book contains write-up of many notable Lambton County families and although many of my relatives are from Lambton, Andrew Holmes is the only one of my ancestors listed. The biography explicitly says that Andrew Holmes (Sr.) was a tenant farmer in Ireland (something I’ve long suspected, given that they were farmers in Canada, but it’s nice to see some corroboration of that suspicion), that both Andrews were quarantined (but Andrew Jr survived quarantine). There are also a few dates and details regarding the purchase of farm lands.

Most interestingly, there are a few notes about Andrew Jr.’s wife, Maria “Mary” Ross. I know from an Ancestry index that Maria’s parents are George and Elizabeth Ross, but I have almost no additional information about them. The biographical record suggests that her full name was Emma Maria Ross, and that she was born in Toronto, and that her father was from Huron County. I still haven’t found any documentation for the Ross family, even with these additional details, sadly.

The record says that Andrew Jr. “died, as he had lived, firm in the faith of the English Church. In politics he was a Conservative, while fraternally, for forty years he had been a member of the L.O.L.” (!)

The last bit of information: Andrew and Maria had one extra child that I didn’t know about — a daughter, Margaret, who died in infancy.

Until now, I had made surprisingly little progress on Andrew Sr. and Andrew Jr. While I can’t really say I’ve learned a ton, comparatively speaking, it feels like a flood of new knowledge.