Comics classes are keeping me on my toes, these days. I finished up my “Drawing the Human Figure From Your Head” class on Monday (excellent, excellent class, by the way… I’ve taken both life drawing and constructive drawing during my cartooning program, and this class really clicked in a way that the other classes did not). Both this class, and the one before it (“Heads, Hands and Faces”) went at a bit of a breakneck pace — my head was full by the end of each night. 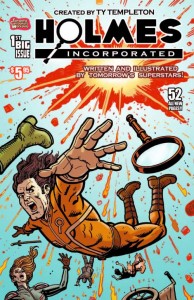 Last night, I started the intense workshop class, “Holmes, Inc.” There are something like 15 of us, and the end result of the class is gonna be an anthology of stories involving the “Holmes, Inc.” agency — the descendants of Sherlock, Mycroft and Dr. Watson. Last night, Ty also suggested that they’re a bit like the S.H.I.E.L.D. of their universe, too, which made me go, ah, yes, of course! This will be the fourth issue of Holmes, Inc. — each of the other three is available for free (as in beer, not speech 🙂 on Drive Through Comics. There is a lot of variation in style and experience in the various stories, but they’re fun to read, running the gamut from egotistical displays of deduction to monster-fighting to moral quandaries.

We’ve got a bit of a writer-to-artist ratio problem in this class. Far more writers than artists this time out. Ty and Keiren seemed to be improvising plans to resolve that problem — I get the impression that they’re pretty good at creative problem-solving. I’m gonna be part of a small gaggle of creators who are doing both, but the class emphasizes collaboration, so we’ll write a script to be handed off to a different artist and receive another writer’s script to draw.

Personally, I get a bit of a kick out of the fact that the comic shares a name with me, although I’m sure I think about this far more than anyone else does. It’s just that, having my last name, I grew up with peers who never let me forget that I had the same last name as Sherlock Holmes — the brilliant detective has always loomed large in my life. Even now, when I’m trying to give my name over the phone, I say, “BC, like the province; Holmes, like the great detective.” Anyway, I’m tempted to suggest that I be credited in the book as “BC Holmes (no relation).”

And if that’s not enough, I’m starting another class — Penciling the Page — in two weeks. Comicspalooza!