Today is Blender Day. Version 2.82 should be released later today.

I’m pretty much a noob with Blender, but I decided a while back to switch from SketchUp to Blender for various reasons. I’ve grown some pretty good SketchUp experience, so it’s sad to fumble around with basic stuff again.

One of the earliest things I modelled in SketchUp was a table from Voyager. I chose it because it was mostly simple but had a few complicated bits. I was also lucky to find a good photo of one of the real props (which included some dimensions).

END_OF_DOCUMENT_TOKEN_TO_BE_REPLACED

November 12, 2017 BC Holmes Uncategorized No comments

I’ve recently been trying to develop my skill with Trimble SketchUp (formerly Google SketchUp). I’ve never really done much in the way of 3D modelling before, so a bunch of this is really new to me.

The first time I tried using SketchUp was a few years ago, as a tool to help with comic panel background design. I bounced off of it pretty quickly because it wasn’t terribly intuitive. But I was recently inspired to try again after seeing some really wonderful photo-realistic renders on DeviantArt.

I watched a handful of very helpful YouTube video tutorials which helped to understand a bunch of 101- and 102-level things that made my second attempt with the tool far more successful. (This video of a SketchUp conference session, in particular, had a ton of good 102-level tips.)

So I sat down and tried my hand at modelling some basic rooms and then modelling my condo floorplan and so forth. And then I decided to try my hand at modelling something based on a real-world object. Actually, I used a piece of set furniture from the Star Trek: Voyager series. Their mess hall tables were mostly rectangular shapes (so: relatively easy) but with some complicated bits as well (so: good practice). I found it hard to find a good reference picture of the base of the table, but ultimately discovered a great photo from an auction held after the show ended. The web page that had the picture also gave me some great guidance on the size of the table. 30″ x 30″ and 27″ tall.

So with those guides, I set out to recreate the table in SketchUp. I screwed up my first attempt. But I did a not-bad job on the second attempt. 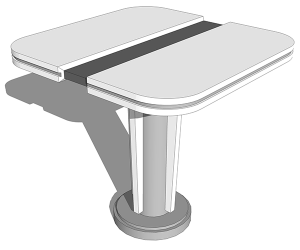 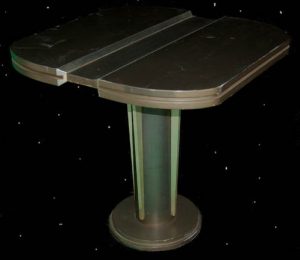 So: observations. First, the photo makes the table appear far more yellow/brass coloured than it appears in the show. I tried to stick with the greys of the show.

Second, I was aware, when I made it, that the rounded corners weren’t quite right. The photo reference has a more oval-shaped corner; mine’s round. That was a limitation in my knowledge: I didn’t know how to get a good round corner that’s not circular.

Third observation: in the bevelled part of the table, my angle is 45°. I think the actual table is a bit closer to 30°. Also, there’s a very subtle vertical edge that I’ve missed.

The flaring bits on the base of the table are too wide in my version. I’ve made them an inch wide — a half inch is probably closer. Lastly, the base needs to be wider, and the lower portion of the base is too tall. Minor things that can easily be corrected.

All-in-all I’m pleased with the practice.