But today I decided to try to locate Ernestine. “Ernestine Stratton” seems like a name that’s not terribly common. And the married name, Sandgridge, looks distinctive (spoiler alert: I can find no Sandgridges anywhere) I couldn’t find anyone in Canada named Ernestine Stratton, so I speculated that the family went to the US. Sure enough, I quickly found a 1910 US Federal Census for Joseph H., Julia and Ernestine Stratton in Salt Lake, Utah. But was this “my” family? I was uncertain. Joseph was described as 55 years old (suggesting a birth year of 1855). His birthplace was described as Canada. But his father’s birthplace was described as England. Hm. I can’t say for certain that John Stratton wasn’t born in England, but I would have expected Ireland. But also, people aren’t terribly accurate about censuses.

So I checked a few more records. The same family appears in the 1900 and 1920 censuses. Joseph sometimes claims to have been born in Michigan. In 1900, he claims to be “American B.A.B” (born and bred?). Julia is from French Canada. Plus, there’s another child in the 1900 census: Geneveve [sic] Stratton.

So I’m fairly uncertain. Until I start looking at other people’s trees. One Ancestry member has a fairly well-fleshed out tree. And it includes a records for Ernestine Stratton and her husband, Henry Langridge. Aha! Once I try adding these additional names into my searches, I’m getting many hits. 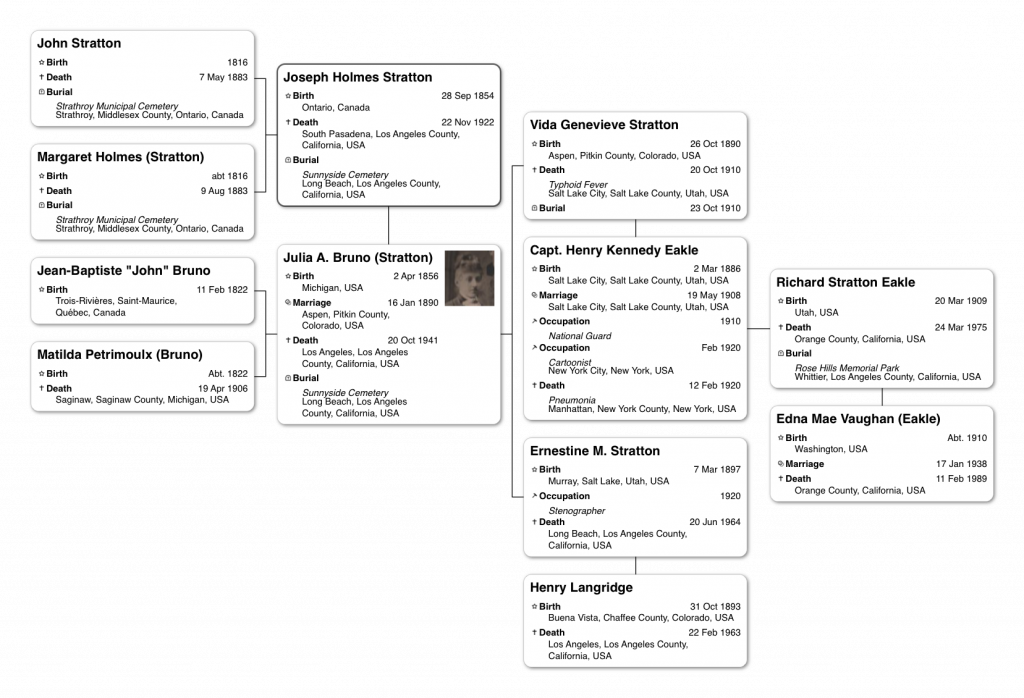 Soon I have a fairly clear (and well-sourced) picture of this family. Both Vida Genevieve Stratton and her husband, Henry Eakles, die very young. When Henry Eakles dies, he’s working as a cartoonist in New York, and seems to have some long-standing breathing issues that required him to live at low altitudes. His son, Richard, is 17 months old when his mother dies, and he’s only 10 when the father dies. It’s likely that he was raised by either his grandparents or his aunt Ernestine.

Joseph and Julia’s family moves around a fair bit. They were married in Aspen, Colorodo, but are living in Salt Lake City, Utah by the 1900 census. They appear to have moved, briefly, to Arizona where several voting records and school yearbooks document the family. Importantly, in one of those Arizona records, it’s established that Joseph’s middle initial “H” stands for “Holmes”. Thus his full name is Joseph Holmes Stratton (his mother gave him her maiden name as a middle name). Finally, the family moves to California, where they live out their final days.