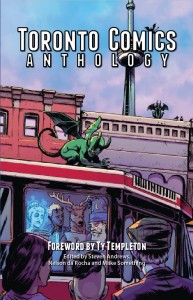 Back in, like, April I heard about a gang of folks in the Toronto comics scene who were gonna get together to make a comics anthology. Most of the people involved — maybe even all of them — had been through Ty’s comics classes, and folks wanted a nicely-printed collection to showcase our work. So we chipped in on printing costs and accepted a unifying theme (“Toronto!”) and then rolled up our sleeves.

So, after a few months of scripts and layout and final art, the book has come together. I’m the only one of the contributors who both wrote and drew their own story, but holy fook there are some nice artists in this book. After I saw some of the other artists’ pieces, I suddenly hated my black plate — it’s weird, I usually go all-out on the black plate, and it was only after I handed in my final pages that I realized how little I used solid black in the final art. But I’m mostly content with my end result: there are some parts I’d love to go back and re-do, but I’ll probably never get around to it.

Anyway, editor Steven Andrews has done a lot of the final layout and marketing stuff. He threw together a web site announcing the book. I’ve already seen one of the early proofs, and the official print run should be sent out in a coupl’a weeks. Me, I’m delightedly looking forward to snagging my own share of the books.