For my part, I’ve always found soft-copies of things easier than working with paper. I can write using a keyboard far faster than I can write using a pen. (The only part of the book, Writing Down the Bones that really spoke to me was the part about finding the right pen — to this day, I’m picky and anal about the types of pens I use. But I’d still much rather use a keyboard). So it seems like a bit of a no-brainer that I’d want to adapt to using digital drawing methods. And I don’t know why I just suddenly got the bug to start adapting now, but I do find myself wanting to invest some time at it.

Scott McCloud says, in Making Comics, that he’s been putting books together completely digitally for ten years (and that book’s 6 years old, now). That’s always stuck out for me. McCloud admits that he hand-draws full thumbnail breakdowns and then scans those as the first step in his process. But after that, it’s all digital, all the time.

In contrast, take a look at these videos, in which DC artist Freddie E. Williams II draws Batman digitally. As Williams says, in The DC Comics Guide to Digitally Drawing Comics, he starts with digital thumbnails.

(These are from a two part article from The Comics Journal).

So, this vacation, I decided to start learning digital art. (There’s a Digital Painting and a Digital Illustration class at George Brown. I’m tempted.)

sabotabby, let me try her Wacom tablet — I was so awful! But! I can only get better!

(I found it really refreshing to see how sketchy Williams is for the first passes. It makes me feel a lot better about how hard it was to get good with a tablet).

So I bought a tablet, and it arrived last night. Here it is: 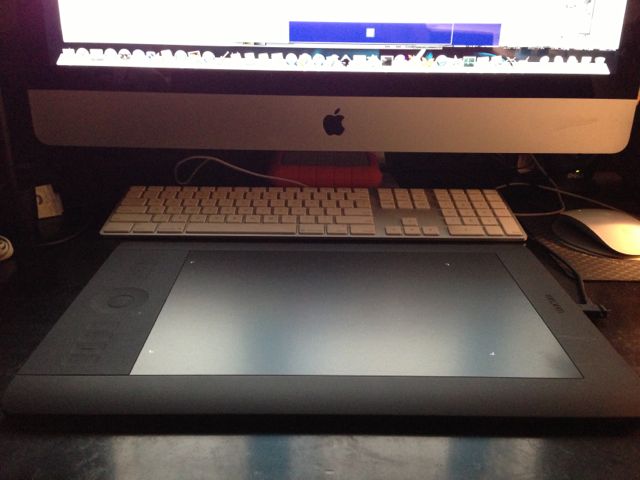 It’s an Intuos 5 tablet, medium-sized. I’ve had it for less than a day, and I’m already keen to get the wireless add-on: the cable is annoying.

Here’s my absolute first drawing with it. Notice how bad it is — it’s awesomely bad! But I’m putting it out there as an interesting reference to chart my progress against it. 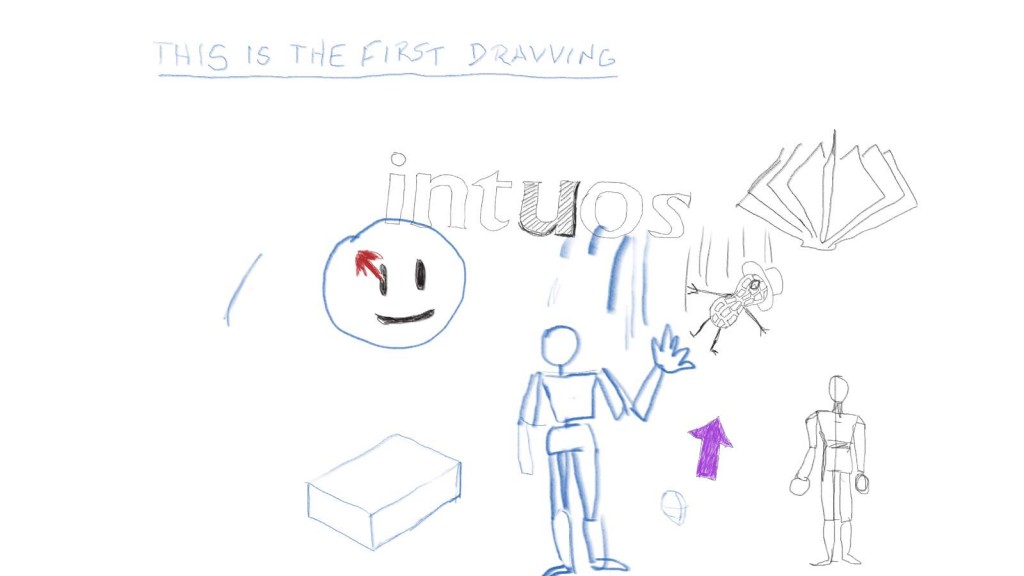 The Intuos logo was made by tracing over a logo from the “set-up” book. I was playing with a trial version of Corel, which is a tool I don’t really know, but which mostly works similar to Gimp and other drawing tools.

I still have a bunch of things I need to get better at. I think I can do a good job with panel arrangement and pacing. I feel like I got pretty good with inking. And I’m not-bad when I’m drawing from reference. But I think I need to do a lot more work with anatomy, which I kinda suck at. And I’d like to be better at perspective; I’m okay with basic one- and two-point perspective, especially with things like buildings, but I’d like to get better at drawing people in perspective, and things like panel layouts from high or low “camera” angles. To some extent, it’s weird to complicate the learning process by throwing digital art into the mix, but heck, I’m gonna complicate it.