December 31, 2015 BC Holmes Uncategorized No comments

Every year, I make a post about films I particularly enjoyed that year. This year seemed harder than most. Not a tonne of films particularly stand out, and I especially feel like I’m deriving much more enjoyment out of some of the really well-made TV shows lately. I was also really busy in September of this year, and didn’t manage to make it to the film festival, which is where I usually find one or two of my favourite films of the year. 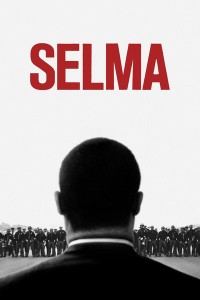 Number 5: Selma. Mostly on the strength of David Oyelowo’s performance. I feel like Oyelowo’s omission from the Best Actor Oscar nominations is glaring. I remember Oyelowo from his role in early seasons of MI-5, but he’s been in some much more stand-out roles lately. He was probably the most crucial role in The Butler, for example (strangely, not many films end up with such a pro-activism message).

I feel like the movie was probably too kind to Johnson who is constantly shown as someone who wants to do the right thing, but feels like he can’t get the backing. But I’m more interested in people like Governor George Wallace (well-performed by Tim Roth). It makes me wonder: who are today’s politicians who’ll be portrayed as the villains in movies 50 years from now? I mean, we probably know who some of them are. It’d be nice if we had a nice juicy drama showing Stephen Harper as the evil fuck he really is. Who’s going to play Antonin Scalia or Clarence Thomas or Donald Trump in the hard-hitting political drama of 2065? 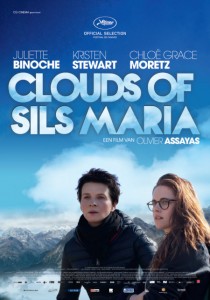 Number 4: Clouds of Sils Maria. I waffled about including this one on the list because it suffers a bit from having a few too many talking heads scenes. But it’s a movie that made me aware that Kristen Stewart can really act. She’s really good in it. And her last scene in the film is just so perfect.

It’s a fairly literate film, with characters rehearsing/dissecting a play which serves as a metaphor for much of what’s happening in the film, itself. In a sense, it’s a story about age, and the perceptions of age when one is young, and how that evolves or can’t evolve as one gets older. How we’re constrained by our perceptions of aging out of relevance. It’s also about acting, and the theatre, and how that also privileges youth. It’s an interesting film. Occasionally just a touch too slow and wordy, but quite interesting. 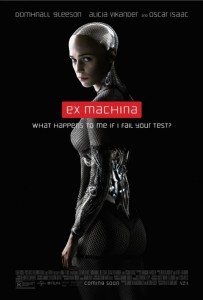 Number 3: Ex Machina. Like Sils Maria, above, this film doesn’t always hit the mark, but the moments that do really shine. At WisCon, there are interesting panels about why robots are so often strongly gendered (and what gender they take when they’re in specific types of stories). I liked how the film tried to work with the question of why creators of AI were ultimately going to give artificial life forms genders.

The film is full of uncomfortable situations: we essentially have a woman locked in a room, but we’re supposed to think that it’s okay because no one has proven that the woman is sentient. If she’s not sentient, then her imprisonment is supposed to be “okay” ’cause she’s just a machine. That’s just kind of the going-in position of the movie; we are not initially invited to see the set-up of the movie as horrible. I like that the film gets us to the place where we’re uncomfortable with the whole process of “testing” her. 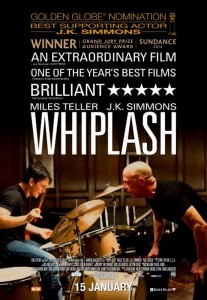 Number 2: Whiplash. At one level, this film can be problematic if you take at face value its statements about the nature of musical genius. And it’s very hard to watch, especially if you find J.K. Simmons browbeating other people for an hour and 45 minutes to be discomfiting. But I liked that it didn’t seem formulaic. I never felt like I could guess what was going to happen next.

In a sense, this film is the kind of story that is usually a sports movie. Kid has some talent, but it’s through the tough coaching of the school’s revered coach that kid manages to shed his initial cockiness and rise to new heights. Whiplash is not quite that story structure, but it’s interesting to think about in comparison to that kind of sports movie framework. But like I say: a hard movie to watch. 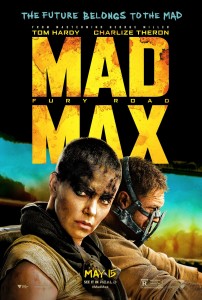 Number 1: Mad Max: Fury Road. I just loved this film. It wasn’t perfect, by any means, but there was just so much good about it. I particularly liked how sparse the dialog was. Whole scenes conveyed with no dialog. For example, there’s the scene where Max has just let Furiosa and the “wives” back into the cab of the truck, and he’s holding Furiosa at gun point, while he’s also locating and collecting all the weapons in the cab. Without saying anything.

Besides: any movie that can get the MRAs in a snit has my support.

No, I have not seen the new Star Wars movie. I’m still pretty bitter about the three prequel movies, and am slow to forgive the franchise. And, yes, I am hearing everyone rave about The Force Awakens. So I’ll probably watch it when it comes out on iTunes or Netflix. What can I say? I’m slow to forgive.

Some movies that I am interested in: Secret in their Eyes (I think I’ll enjoy comparing the Hollywood version to the Argentinean one, but I’m pretty sure that I’ll prefer the Argentinean one, because it was soooo good); East Side Sushi (the trailer makes it look quite interesting); Crimson Peak; and Doctor Strange.

There were some stinkers, too:

I’m really quite fond of stories about immortal characters, but The Age of Adaline was really bad. I mean, really, she’s gonna settle down with someone with 80 years less life experience?

Fantastic Four was really bad. I’m surprised that they screwed up that source material as much as they did.

I dunno what possessed me to even try watching Fifty Shades of Grey. Nothing good to say about it.

I was surprised at how bad Serena was. Jennifer Lawrence could not save this movie from awfulness.

I was extremely underwhelmed by The Man from UNCLE, which seemed only tenuously related to its source material. It’s more of a highly stylized Mission: Impossible set in the 1960s than anything to do with the original show. They aren’t even really the UNCLE organization until the very end of the movie. Just, weird.

Paper Towns was an interesting attempt to tear down the manic pixie dream girl story. I’m not sure that “she was an actual human being with all the foibles that entails” is quite the great realization that the movie seemed to think it was. But, hey, it probably blew the minds of Hollywood execs.

I’ve been enjoyed a bunch of TV shows, because it’s the Age of Good Television.

First up: they cancelled my current fave show, Hannibal. The third season wasn’t quite as strong at the first two, but it still kept my interest. One scene between Hannibal and Will kinda traumatized me this year.

My second favourite show is probably Penny Dreadful. I’m trying to get Siobhan into the series (she’s seen half of the first season) and I saying that I like how many different facets of Victorian society we see. The Explorer’s Club to the underground gambling den. The Grand Guignol theatre to Sir Malcolm’s stately home. I love the addition of Mr. Lyle in the second season, but the second-season finale had a moment that really cemented the show’s biggest problem.

Both Daredevil and Jessica Jones were fantastic, but both of them have race issues. I’m fascinated by how much that those shows managed to do right. But I hope subsequent seasons learn from the critiques of their race problems.

I liked the end of Mad Men, although I’m not sure I had a ton of patience for Don’s latest roadtrip to find himself. The last episode made up for a lot, though. I’ve also been interested in some of the storytelling techniques that have been happening on The Good Wife.

I’ve dabbled in a bunch of new SF shows. Childhood’s End didn’t work for me. Dark Matter and Killjoys were both enjoyable, but without a lot of substance. I’m quite enjoying The Expanse as one of the more engaging new SF shows. I like that the stories are fairly dense. I’m interested to see how this show develops. The Man in the High Castle was somewhat hit-and-miss. The show certainly messes with your head, given that, at a key moment, the narrative makes you root for Hitler. But the first third of the show is a slog.

Speaking of “messing with your head”, I enjoyed Wayward Pines. Storywise, it’s only okay, but it does get you to a place where you start to ponder questions like “how much totalitarianism is a good thing?” Apparently, it’s getting a second season, but I wouldn’t be surprised if they ran out of story fairly quickly.

I continue to enjoy Agents of SHIELD: it’s pretty solidly entertaining these days. I liked the first season of Agent Carter, but I hope they add some substantial characters of colour to the show. And I’ve been keeping up with Supergirl, even though it’s far lighter in tone than stuff that I usually like. I know that a lot of comics fans like The Flash, but it just wasn’t doing it for me. So far, Supergirl has been delivering the potatoes, but I’m not anywhere near as interested in it as I am, say, Jessica Jones.