January 4, 2019 BC Holmes Uncategorized No comments

Let’s start with TV, because it’s been another good year for TV. 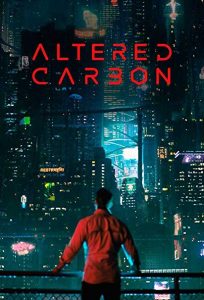 Number 5: Altered Carbon. I went back-and-forth on my top 5 list. There have been a lot of good shows and I’ve been tempted to put different things in some slots, especially in position number 5. But at the end of the day, I think I enjoyed Altered Carbon more than some of the other candidates. It has flaws: I disliked how tightly every single plot point in the series fit together into one narrative. That felt too neat. And the casual misogyny that seems to always accompany anything with a noir aesthetic was annoying. But Blade Runner-esque visuals and cool ideas about tech and general good writing. I was there for all of that. 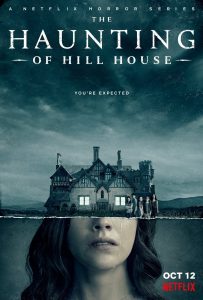 Number 4: The Haunting of Hill House. While this show obviously diverges a great deal from the original book that it borrows its title from, I thought that it was a surprisingly good take on TV horror: horror that’s eerie and foreboding, without relying on jump scares. I was also really interested in the way the story dwelt on the psychological damage done by growing up in a haunted house.

A lot has been said about the show’s use of background ghosts and I loved the uses of extended shots (especially in the episode in the funeral home). But more than anything else, it was wonderfully successful at being creepy. 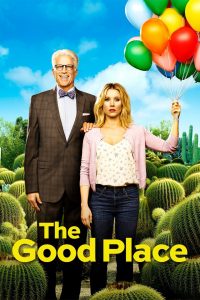 Number 3: The Good Place. Holy forking shirtballs this comedy is good. And what’s so interesting about it is that the show is completely willing to attack its premises head-on, burn the premise down, rewrite itself and start a new premise, and do this in a way that feels like the creators know exactly what they’re doing. There are a lot of shows that take a great deal of care to assemble a collection of Chekhov’s guns on a wall, and it’ll show you loving scenes of the guns being put there, but the guns rarely go off because the creators don’t know what to do next. The Good Place fires off a few guns every season. 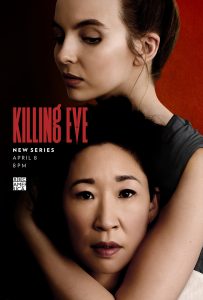 Number 2: Killing Eve. I’ve made no secret of the fact that I like the competence-porn quality of professional killer stories. Killing Eve has that, plus dark humour, and Sandra Oh, and gorgeous trips to European cities and a wonderful cat-and-mouse chase where you’re never entirely sure who’s the cat and who’s the mouse. 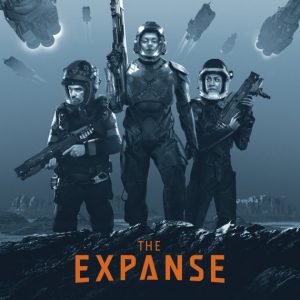 Number 1: The Expanse. The third season of The Expanse was amazing: the strongest to date. We still have all of the wonderful Earth/Mars/Belt politics. Avasarala is still incredibly awesome. The protomolecule has gone from being the thing behind each season’s monster to something that’s completely changing the stakes for humanity. Amos has one of the most Amos scenes in the history of the show. Anna is an incredibly well-done new character. And I believe that Draomi is real.

I was devastated when SyFy cancelled the series, but thankfully it’s been picked up. To date, I’ve bought seasons on iTunes and I don’t know how the migration to Amazon will change how I’m gonna access the show, but I’m just glad it’s going to continue.

Runners-up: Counterpart was almost in the top five. I initially wrote it off as a weak imitator of Fringe, but the strength of J.K. Simmons performance and the interesting world-building grew on me. I like the cold-war vibe to the series.

The 3rd season of Unforgotten was good, but not quite as good as the 2nd season. And I disliked the way they were handling Cassie in the final couple of episodes.

I really enjoyed Netflix’s remake of Lost in Space, a show that’s easy to mess up.

The latest season of Doctor Who has averaged better than previous Moffat seasons. I don’t think that the highs are quite as high, but the lows are nowhere near as low. I like that the Doctor warned the new companions/friends/”Fam” that they’re gonna be involved in some dangerous stuff, rather than just go with the whole, “hey, wanna take a cool ride?” thing.

I’m not sure if I should consider Nanette a TV show or a movie (or do I need a separate category), but damn it’s good.

The Little Drummer Girl, and One Day at a Time and The Keepers and Wormwood were all quite good.

I’m torn about Legion: on the one hand, I love a lot of the aesthetic of the show, but I think that it’s not always successful telling the kind of story it wants to tell. But you’d get these amazing scenes, like the dance battle from this year’s season opener:

Last year, I thought that the second season of Travelers was a bit of a jumbled mess (although the parachute episode was amazing), and I couldn’t imagine how it would get out of the corner it had painted itself into. This season was a lot stronger, but has some harsh parts toward the end that make me wonder how they’re going to get out of the corner it has painted itself into. Will there be a fourth season? Hm.

I feel like there hasn’t been a good Scandi-noir cop show in 2018, which makes me sad. I tried Hinterland, which bored me, Shetland which was okay but not great, and La Mante was an evil, killer trans woman story.

Now on to movies. Usual disclaimers apply: I don’t see that many movies in theatres, so I’m usually on the DVD release schedule, not the cinema opening schedule. And I’ve been watching fewer and fewer films over the last few years because all the really good storytelling has been on TV. 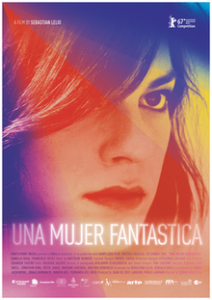 Number 5: A Fantastic Woman. I confess that I’m ambivalent about this film. On the one hand, it’s a film about “the things trans folk have to endure”. But it’s a major, Oscar-winning film with an actual trans actor as the lead. That’s not nothing. And it’s not an “I’m coming out” movie or a transition movie. It is a moment in a life of a trans woman — a grief-filled moment, admittedly — that’s made all the worse because of a bunch of cis people can’t scrape together an ounce of human decency. 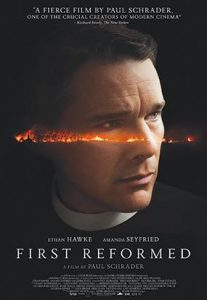 Number 4: First Reformed. I was saying to Siobhan that I think I just have a thing for movies in which the main character slowly unravels. Ethan Hawke is outstanding in this film about a preacher who is lost and who is using God and religion to grapple with his own personal demons. And then he gets close to environmental activists and starts wondering the question, “what will God think of what we’re doing to the planet?”

Part of what I find interesting about the film is that seems to side-step the usual Hollywood narrative about radical activists: “their cause might be just but they go too far.” “Too far” usually involves anything that threatens the status quo: a boycott is basically just a small step away from blowing up a building when we’re talking about activists. And while First Reformed doesn’t portray a man who has a healthy relationship to activism, it also doesn’t make the status quo look viable. 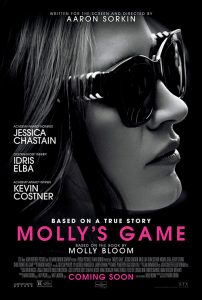 Number 3: Molly’s Game. I watched this early in the year and really enjoyed the script. The characters were people who could use their words: they were able to communicate important ideas effectively. There’s also a scene that contains one of the most perfunctory therapy sessions ever filmed. Toward the end of the film, the main character riffs on The Crucible: normally Hollywood avoids literary references unless it’s willing to invest a certain amount of time to educate the audience about the source. In this case, the film makes a passing reference to The Crucible early in the movie and then at a key moment toward the end, quotes directly from the play (and then quickly draws the connection to the source).

It was the first film I saw in 2018 that left an impression on me. 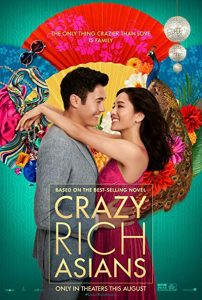 It’s not the standard Rom Com that starts with a meet cute, and introduces hard-to-swallow obstacles that keep our couple separated. There’s no “I’m in love with X, but they’re about to marry my best friend”-style awful plot element. Constance Wu plays a Chinese-American, daughter of a relatively poor immigrant, meeting her boyfriend’s wealthy Singapore-based family, who look down on her American acculturation.

There’s a lot about the film that is stand-out, but the real climax of the film involves two characters having a conversation over a mahjong game. And this scene is just stellar. Much has been written about this scene. But this Vox article puts its finger on a key point:

One of the most beautiful things about Crazy Rich Asians is how it refuses to explain many of its most intrinsically Asian elements. That lack of training wheels is intentional: As director Jon M. Chu told me, “We didn’t want to give people an excuse to think of this world as some kind of obscure, exotic fantasyland — this is a real place, with real culture, history and tradition, and instead of just giving them answers to their questions, we want them to have conversations.”

The scene doesn’t try to explain any of the rules of mahjong to you, much like a baseball movie will never try to explain the rules of baseball to you: you’re expected to have a working knowledge of the game before starting to watch the movie. But the scene is so well-done that you understand the key beats of what’s happening even if you don’t know the game. There’s also a bunch of much richer symbolism going on if you’re more fluent with the game.

Number 1: Black Panther. I think this is the only film I saw in theatres this year. Holy crap, was it good. The design was amazing. It was filled with incredible characters like Shuri and M’Baku. It overcame the standard Marvel villain problem, giving us an antagonist whose motivation (and final speech) was clear and powerful. And the overall story worked like a metaphor for superheroes: should an entire country wear a mask?

I’m so happy that this film succeeded so amazingly well, and I can’t wait to see more stories from Wakanda.

Runners-Up: I liked I, Tonya quite a bit more than I expected to. And The Shape of Water was quite good, but not quite as good as, say, Pan’s Labyrinth.

The film version of The Seagull was a nice production. I’ve probably seen more productions of The Seagull than any other play (I think I’ve seen more productions of it than the Scottish play). Admittedly, I like The Cherry Orchard better, but I’ve seen The Seagull more frequently. The filmed version is strong, and manages to find all of the quirkily humorous moments that led Chekhov to believe that he’d written a comedy. Elizabeth Moss is particularly adept at that aspect. It’s also possibly the first time I’ve seen a particularly noteworthy performance from Corey Stoll as Boris Trigorin, a character who is at times likeable and unlikeable. Annette Benning is amazing, and perfectly captures the self-centred Irina. I really liked the film.

The trailers for The Equalizer 2 made it look terrible, but it was a solid action-adventure flick. As was The Foreigner, which is a nice Liam-Neeson-esque “I will find you and I will kill you”-style action yarn.

I thought Avengers: Infinity War was meh, but Ant Man and the Wasp was really fun. The same could be said about Thor: Ragnorok, although the light humour contrasted against such major upheaval made the film seem a bit shallow.

I wanted to like Mark Felt, but the movie never fully gelled. And Downsizing was a mess. Blade Runner 2049 was pretty, but vacuous.