A Creature Who Cries a Lot

June 1, 2015 BC Holmes Uncategorized No comments 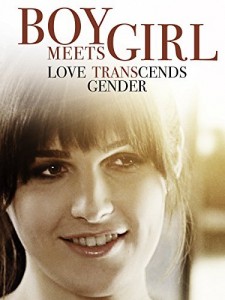 I noticed that Netflix had Boy Meets Girl on its list of recent additions and decided to check it out. It’s very indie and charming, but with occasional bits of dialog that were more awkward than I wanted.

There aren’t a ton of trans Rom Coms out there, but I suppose I’m thinking about it in terms of how solidly it constructs and/or adheres to a “trans story formula.” Perhaps one day I’ll write my autobiography in comic form and I’ll need to know the proper shape for such a story.

Take one trans woman. Well in to transition. Sporting the boyish name, Ricky. Ricky lives in a small town in Kentucky. That alone brings along a context. The townsfolk know who and what she it. We get flashbacks to conflict. But in the present, there’s… what? Uneasy peace? Mutual agreement to not mention the elephant in the room?

For our heroine’s part, she’s wearing the armour of witty comebacks and occasional mundane-freaking. She’s the one that nothing gets to, right up until that moment when it’s a narrative necessity that it all gets to the point of possibly breaking her. We need a supporting cast, of course. Her loving, but not terribly parental father. An absent mother, lost to the requirements of tragic backstory. A younger brother, to whom she can act as the surrogate parent. And of course, Robbie, the one friend who always stood by her.

Who Ricky is, then, can be shown in contrast. Robby is your regular small town guy. A bit of a horndog — he’s dated everyone in town already. Really, that’s essentially the first thing we learn about him. Otherwise, he’s not really looking for true love or the big city. The status quo treats him well enough, and he likes his quo fairly status-y.

Ricky, by contrast, is looking for love. She’s unsurprisingly underserved in the relationship department. She’s less content with the status quo; she dreams of the day that she hears whether or not she’s accepted into a programme at the Fashion Institute in New York. She can leave Kentucky behind, and start her big future.

Robby, of course, can only help up to a certain extent with situating the details of Ricky’s life. His unwavering friendship reminds us that she’s worthy of friendship, of course, but he’s known her long enough that they don’t ever need to discuss trans issues. And this is a trans movie. Trans issues must be discussed.

Thus, we need a new friend. Someone local, but explicably unfamiliar with Ricky and her past. Enter Francesca. Well-mannered young rich woman who lives nearby, but was safely away at private schools and summers abroad, and therefore has never met Ricky or Robby. She’s also engaged to the fellow who will become our primary antagonist, David, a US marine currently serving in Foreign Countrystan. Francesca gloms on to the Ricky/Robbie friendship. It’s not really clear why. I couldn’t help but wonder if having weirdos in her social circle helped her feel worldly.

So the stage is set. The protagonist who wears humour as armour. The best friend/confidante. The new friend who’s looking for a way to temporarily step out of her current life, and finds that in our protagonist. The new friend brings with her a constellation of rich parents and scarily hateful fiance who are primed to reject Ricky. And sprinkle on some hopes and dreams that can be crushed when the third act arrives. And when the situation is at its worst, let’s allow the best friend to be the one to say, “yes, I know I’ve always stood by you, but let me take this inopportune moment to express my reservations about what and who you are.”

Story-wise, it mostly works. Trans woman crushed, as trans women must be. The narrative demands that the supporting characters be reminded that she’s a human being that can break, and so they are. So, reconciliation. New feelings. New hopes. New dreams. Plus a little full-frontal, to remind us all that, yes, this is a trans movie. As I say, the story works, although it all feels a tad paint-by-numbers.

The thing that I liked, and that I didn’t expect, was that at the very end of the story, it’s made clear that Ricky was always stronger that everyone gave her credit for. Maybe everyone needed to see her as being in danger of breaking in order to see her as human. It’s like that line from Richard Bach: “I am watching me become a creature who cries a lot — a creature who must cry a lot — for it almost seems that pity is necessary before kindness is possible.” But I liked that she didn’t have to break, to be seen.