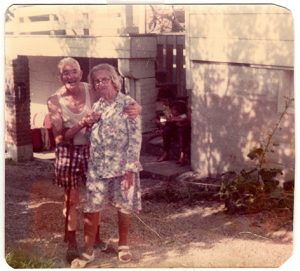 There were some inaccuracies in the record. The certificate claimed that Alton was five years older than he really was, and that he was once divorced. It also suggested that he lived in Detroit, Mich. It’s possible that he might have moved across the border to work, as many of the Kehoes did, but that’s really the first time I’d seen that. And the names of his parents, Peter Kehoe and Mary Carroll, were right.

According to the record, Rose Skeens was older than Alton, and twice divorced. Perhaps Alton was fibbing about his age and previous marital status to make the marriage seem less unusual to the Ohio clerk.

Here’s what I knew about Alton. He’d been born on 29 Dec 1905. He’d be just under 22 on the date of the Ohio marriage, and the marriage certificate recorded that he’d be 27 on the 29 of Dec 1927. Right day, wrong age: he’s exaggerating his age by 5 years. Rose Skeens, on the other hand, is listed as 29 on the 31st of March, 1927 (two years older than Alton’s pretend age), born in Kentucky, twice divorced, and was previously Mrs. Ralph Johnson. What’s more, her parents are Wallace Burge and Shirley William. So, is Skeens a married name? Did she marry a Johnson, and then marry a Skeens? If the Skeens marriage was first, why would she still be using that name? Hm.

I also knew that Alton married his long-time wife, Mildred Victoria Stone in 1936. They remained together until death. What’s more, on his marriage record to Mildred, Alton is listed as a bachelor, not a divorcee or widower. So he’s kind of not mentioning a previous wife. But it also looks like Mildred filled out the paperwork on the marriage certificate, so maybe she didn’t know anything about Alton’s previous wife. She’s also misspelled and incorrectly ordered Alton’s name as “Carl Elton Kehoe.”

One of the first records I came upon was a 1936 Michigan marriage between James P. Callahan and Stella Skeens, listing Wallace Burge and Shirley William as the bride’s parents. In this instance, Stella Skeens identifies herself as married once before, but now divorced. Stella is also about three years older than Rose declared herself to be.

Another marriage record is for Walter L. Burge, with Wallace Burge and Shirley William listed as parents. After that, I located the 1900 US Census for Buffalo, Larue County, Kentucky with family Wallace Burge, Shirley Burge and 5-year-old Stella Burge. The 1910 census shows the same family with 14-year-old Stella Burge and new son, 9-year-old Walter Burge. By this point, I’m pretty persuaded that Rose and Stella are the same person, and that Rose decreased her age for the 1927 marriage for the same reasons Alton increased his.

I can’t find them in the 1920 Census, but by the 1930 census, the family has changed a bit. Wallace appears to have died, and Shirley is living with her daughter, 31-year-old Stella Skeens, her son, 29-year-old Walter Burge and her grandson Paul Skeens, age 15. If previous censuses are to be believed, Stella should be closer to 35.

So, if there’s a son with the last name Skeens, it might explain why that particular married name is the one that has the most longevity.

Paul Skeens is a bit easier to look up: his father appears to be named Kenneth Skeens, but I haven’t yet found a marriage certificate or record of Paul’s birth.

But there’s still a lot that’s unclear. When did Alton and Stella/Rose divorce, and what were the circumstances? Why did they marry in Ohio? Why was Stella using the name “Rose” for this one period in her life, when she seems to use “Stella” at all other times? Was Rose a middle name? Did Alton’s second wife Mildred ever know about Stella? Stella appears to marry and divorce a bit more frequently than is common for the time. What’s that about? Does she stay with James Callahan?

Anyway, as with so many genealogy investigations, this was a bit of a fun mystery to dig in to.