Back to the drawing board

October 22, 2013 BC Holmes Uncategorized No comments

On the weekend, I started to suspect that one of the key family tree connections in the Houle line was based on extremely weak evidence. At this point, I’m pretty sure that connection is wrong.

This whole process feels, in odd ways, like programming. I’m reading a document that I didn’t produce, and I’m having to glean from it what the original author was thinking. It’s a lot like reading someone else’s code. “Why did you put that there? What made you think it was important?”

The problem goes back, again, to Pierre Houle. It’s pretty crucial to understand who his parents are. Once he arrives in Dover Township, he and his family are fairly well documented. There are certain circumstantial hints about his parentage available in the documentation:

All of this lead me to fear that there wasn’t any stronger evidence of the relationship than that. And I think I’m right on this point. Here’s what this part of the family tree looks like, per Don’s notes: 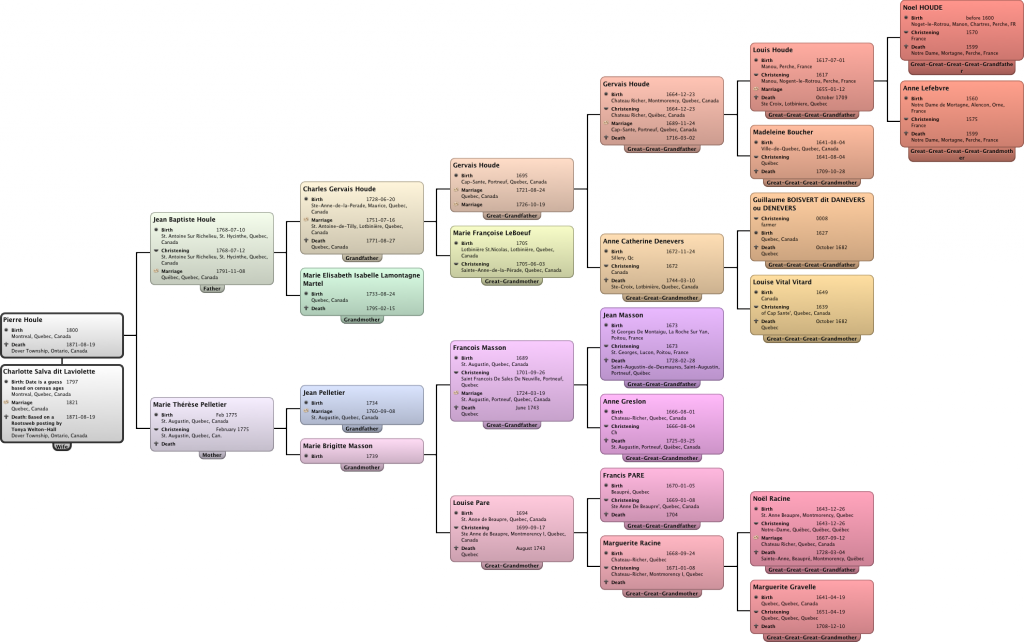 I’ve been trying to correlate and validate Don’s belief in a variety of databases, and nobody else seems to have come to the same conclusion. In fact, most of the time I’ve been able to find records for Pierre Houle, the genealogist has no data about parents. But I have found a few folks on Ancestry.ca/.com who have a different idea of Pierre’s lineage. And I’ve had some Facebook interactions with the “Descendants of Louis Houde and Madeleine Boucher” group, and their records are consistent with the Ancestry.ca view, which looks like this:

Notice that both trees still end up at Louis Houde, but through different sons of Louis (Louis and Madeleine had fourteen kids, so there’s a lot of family).

There are a number of mistakes that Don has made throughout his records — he has problems with misspelling certain names, for example — he almost-universally spells “Cosgrove” as “Crosgrove” and “Matilda” as “Matitda”. And, as a life-long Anglophone, he doesn’t understand French accents and uses them incorrectly. But this feels like the first case where it seemed like his assemblage of the family tree was just out-and-out wrong.