September 7, 2013 BC Holmes Uncategorized No comments

My second TIFF film was a documentary called The Square (or Al Midan): the titular square being Tahrir Square in Cairo. The film is directed by the woman who directed Control Room, Jehane Noujaim. It’s a slick, well-produced documentary and it would not surprise me if it became a contender for an Academy Award.

As an aside, the screening took place at the Bloor Cinema (now called the Bloor Hot Docs Cinema) and I think it might well be the first time I’ve been in that theatre in ten years.

The film, itself, documented about 30 months of the Egyptian revolution, starting in January, 2011 and ending with the unseating of President Morsi this past July (talk about up-to-the-minute relevance). 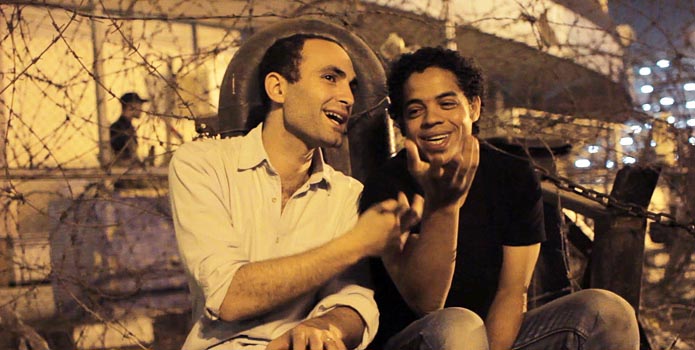 Obviously, any attempt to compress two and a half years of revolutionary activism into a two-hour documentary is going to elide certain details and certain nuances, but I think it does a good job of covering the key highlights of the Egyptian uprising: from the early elation at Mubarak’s resignation, to wistfulness on realizing that the large-scale occupation of the square didn’t continue to see a new president and constitution put in place, to the first hints of divisions among the protestors into “revolutionaries” and the “Muslim Brotherhood” camps and then to cautious enthusiasm when Morsi is elected. And then finally culminating in another uprising against the new government.

Magdy Ashour’s comments in the film are important and illuminating. He’s able to appreciate and articulate the importance of his allegiance with the Muslim Brotherhood but can be critical of many of the actions that it takes. For him, his history of opposing the regime long before the Tahrir Square protests — and being jailed and tortured for that opposition — is significant. For him, the Brotherhood has always played a central role in the toppling of the regime. But he’s close enough to the revolutionaries to understand how some of the Brotherhood’s actions are alienating a part of the uprising.

There are some amazing unguarded moments film involving Ahmed Hassan, who is able to articulate that he loves Magdy as a friend but hates what the Muslim Brotherhood is doing to the movement. Later, as popular opinion is turning against the Muslim Brotherhood, Ahmed phones Magdy to reinforce that statement of friendship. These are interestingly heartfelt moments. I think that one could read the personalization of a political uprising as a distraction from the broader issues that the movement faces (like seeing Les Mis as a love story), but I don’t read that into these moments. What I see is a political movement that is grounded in humanity.

Khalid Abdalla was present for the screening (which was a worldwide premiere) and I found his Q&A comments really wonderful. One of the points that he made was that the story of the Egyptian revolution would be easier to understand and digest if it was happening in a straight line, but that these things so seldom go in straight lines. There are false starts, and changes of course, and that, really, two years is too short a time to evaluate whether or not a revolution is successful. The best they can do is try to lay out a set of principles and constantly look to see whether or not the new leaders are living up to those principles.

He was also quite insightful about how Egyptians now feel like there are three different sides in the fight. In his view, there’s still only two sides: authoritarian fascism or people-centric democracy. He didn’t quite say this, but I get the sense that if Morsi’s government had introduced a viable constitution and hadn’t granted him dictatorial powers, the revolutionaries could have supported that government. At some level it seems facile to characterize the choice as “do the people want rights and freedoms and democracy or do they want a new face of authoritarianism?” But my sense is that Khalid’s saying that that’s precisely how activists need to continue to frame the protest, and not fall into the trap of breaking up into factions.

One of the last comments that he made that really stuck with me was in response to a question from the audience about the role of technology in the revolution. After Jehane Noujaim talked somewhat about moments that video and other technology enabled, Khalid said that most Egyptians react to this question with some disgust because it makes them feel like the revolution is being reduced to some kind of social media event, and it clearly isn’t that for the people in the middle of it. He then recounted a moment when a colleague was asked what the most important piece of technology was in the context of the revolution, and the colleague responded, “a rock.”