September 8, 2013 BC Holmes Uncategorized No comments

My third film of the festival is a Venezuelan flick called Bad Hair (or Pelo Malo). Not a very happy-making film, that. It’s funny: after the film ended, I kept comparing it in my mind to Ma Vie En Rose — it feels to me like the opposite film. Warning: spoilers. 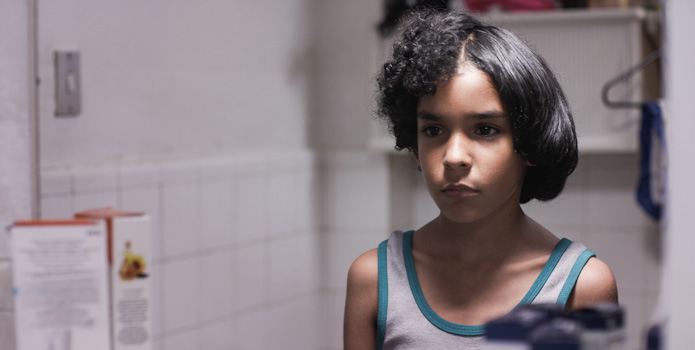 In Ma Vie, Ludo is assigned male at birth but clearly shows signs of being a trans girl. Her middle-class parents attempt to be supportive, but in the face of ostracism from family and friends (and culminating in her dad losing his job), the parents turn on Ludo and try to shame him into behaving like a boy. And then, at the end, Ludo’s mother’s heart grows four sizes that day and she accepts Ludo as she is. Happy ending.

And Bad Hair is kinda the opposite story. In it, 9-year-old Junior is subtly coded as gay. He’s a biracial son of a Latina mother and a black, deceased father, and he spends much of the film obsessed with the idea of having his curly hair straightened, and looking like a singer when he gets his school photo taken (in his mind, to really look like a singer, you have to have straight hair). His working-class mother (Marta) spends much of the movie concerned about money, as she’s recently lost her job as a security guard (the reasons aren’t revealed in the film, but a mention is made of an investigation). Her criticism of her son’s effeminacy is fairly passive-aggressive. “Why do you dance that way?” she’ll ask. And when he sings to himself on the bus, she moves away from him and sits in another seat.

Junior’s paternal grandmother would like nothing better than to have Junior live with her. She pretty much insinuates that Marta’s second child, a fair-skinned baby boy, isn’t her son’s child, and doesn’t want anything to do with the baby. But she’d happily give Marta money to let Junior stay with her. She also thinks that she knows how to raise a queer kid so that the kid won’t get killed. Grandma also seems to recognize that Junior has a bit of a crush on the older kid who runs the nearby newsstand.

As I said, I kept thinking about this story as the opposite of Ma Vie En Rose: in Ma Vie, Ludo’s queerness is overt, talked about in direct language and directly addressed between Ludo and the adults. In Bad Hair, Junior’s queerness could almost be read down by the adults as “he’s a weird, difficult kid.” But there’s also sense of Marta not wanting to be honest with herself about what she knows. About halfway through the film, she’s talking to a doctor and finally asks, “Could this (my stand-offish treatment of him) be why he’s gay?” Until that moment, I wasn’t really sure if the film was suggesting that she didn’t really know. But, no. It’s more the case that so long as we don’t directly address it, we don’t have to admit it.

And it’s interesting, in this scene with the doctor, that although she expresses wanting to be closer to Junior, and worrying that she somehow did something wrong that made him this way, she nonetheless doesn’t want him to be gay. (Because, after all, “he’ll suffer”). And actions speak louder than words: Junior is far more loving and tender toward his mother than the other way around.

And I kept waiting for the moment of crisis that was going to force resolution on the situation. Some narrative upheaval that was going to force everyone’s feelings to the surface. And the film doesn’t do that. The final scenes of the film show Marta finally reinstated as a security guard. While working a night shift, alone, she finds herself absently singing the song that Junior regularly practices. The next morning, she makes his favourite breakfast and then starts packing up his clothes. “You’re going to live with your grandmother,” she tells him. He pleads with her. He promises that he’ll stop singing. And she ups the ante, and lays out hair clippers. The compromise is clear: boy’s haircut. Stop being so effeminate. Faced with being sent away, he barely hesitates — he picks up the clippers and shears off all his hair.

The final image shows the kids back at the first day of school, all in tidy formation in the school yard, singing a back-to-school song. And the camera pans over to Junior, short haired. Not singing. Credits.

So that was a bit of a kick in the teeth. Again, kind of the opposite of where Ma Vie ends up.

In the Q&A afterward, the director, Mariana Rondón, was asked what made her decide to do a film about queer issues. She replied that she didn’t see the film as a “queer issues film”; rather, she thought that it was a story about how hard it is to be your own true self in the face of enormous social pressure to conform. And she felt that that was a message that particularly needed exploring in Venezuela at the current time.

In my activist circles, Venezuela is spoken of as a glowing socialist utopia; apparently that might not be 100% accurate.