September 9, 2013 BC Holmes Uncategorized No comments

My fifth film was a drama called 1982. It’s a small, indie film by a relatively new director named Tommy Oliver. I must confess that I can’t quite remember what lead me to choose this film — it’s not foreign (except in the sense that, yes, Philadelphia is in a foreign country) and it’s not a documentary. It’s also a film where addiction is at the centre of the story, and I think I learned from watching Flight at the beginning of the year that I lack empathy for addict characters in film. But, whatever led me to choose this film, I chose it, and when Sunday night rolled around, I went off to the theatre to watch it. It was also a World Premiere, and those are always kinda neat. 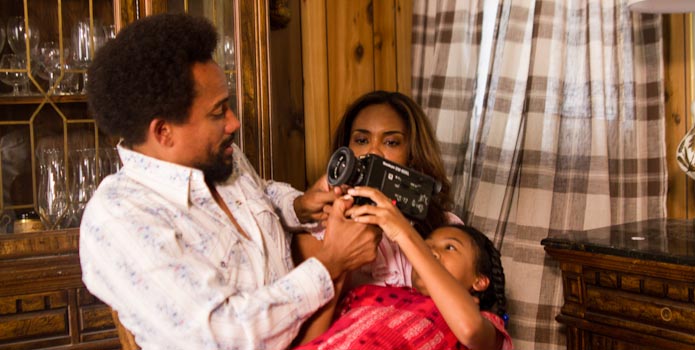 It’s a small, indie film, with relatively-unknown actors (although Ruby Dee has a small role in the film), and limited budget. Given its indie roots, I was mostly impressed by how well the film was able to transport the audience back to 1982: occasionally a prop or set piece would look a bit rough — like it’s spent 20 years in a junk yard — but mostly I was content with the production values. Much of the film was apparently shot in the house that Oliver grew up in, where his grandmother currently lives; that added a lot of verisimilitude to a semi-autobiographical story.

The film opens in the household of an average family — Tim, his wife Shenae, and his intelligent young daughter Maya (brilliantly played by child actor Troi Zee). Pretty quickly in the film, Shenae succumbs to the lure of an old boyfriend and local dealer who comes bearing injectable gifts. The film lets us know that Shenae had a drug problem in the past, probably to explain why her decent into non-functioning behaviour happens so quickly. Interestingly, though, the film largely takes her out of the story, as she leaves the household in favour of a life with no responsibilities. Mostly the film is about Tim trying to provide some kind of continuity of home life for his daughter. Shenae appears a few times, usually timed to maximize the amount of chaos she brings into her husband and daughter’s life. I guess what the film is really exploring is Tim’s transition from happy husband to someone who is trying to get his wife back to someone who has to go hard line and cut his wife out of his life because anything else just enables to a certain extent. And then to still be emotionally available when she’s reached the point of being ready to clean up.

The film is amazingly caring. I think that if I were trying to write a story like this, the emotion that would be at the centre of the film would be anger, but instead the emotion at the centre of 1982 is caring. Tim caring for his daughter, caring about what happens to his wife, just being a caring and compassionate person even when things are at the worst that they can be. It’s a strong film, even if it could stand to vary its tone a little bit more. It’s not quite overly earnest, and it’s not quite all violin strings all the time, but it is a little unvaryingly sad; the few moments of levity usually involve Maya. In any event I’d be very happy to see more from this director.

The director acknowledged in the Q&A afterward that much of the film reflects his experiences with growing up with a crack-addicted mother. It was even more eye-opening when later he mentioned that his (now-clean) mother was in the audience seeing the film for the first time and she was able to give her own quick review of the film.