September 11, 2013 BC Holmes Uncategorized No comments

My sixth film was my first dud. It was the first film where, in the latter part of the showing, I found myself thinking, “Is this going to end soon? My butt hurts.” I have spent a lot of time thinking about it, since, because I think the message of the film makes me annoyed.

The film is called The Militant (or El Lugar Del Hijo, which Google translates as “The Place of the Child”), and it’s an Uruguayan film. 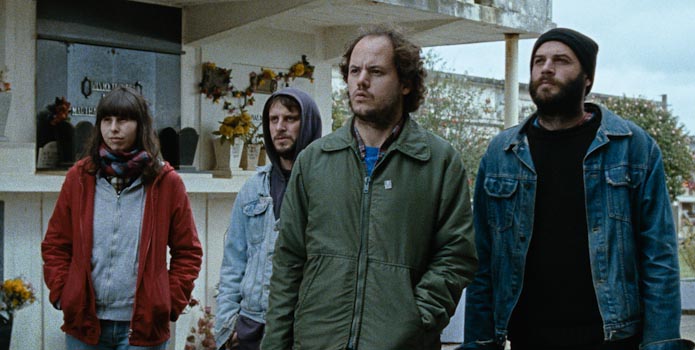 The film starts in Montevideo, where Ariel Odriozola is a politically active student. There’s a big student show of solidarity with various striking organizations and the students have been occupying the schools. Ariel, himself, is committed member of the occupation leadership. But not someone with huge prestige. At the very beginning of the film, Ariel learns that his father has died and immediately leaves a student meeting to head to Salto to deal with the family affairs.

Once he arrives in Salto, various characters arrive to infodump the situation. The student movement in Salto is spinning its wheels and would love Ariel’s help. Ariel’s father’s notary tells Ariel that his father died with a ton of debts, and the father’s girlfriend has installed herself in the house with no interest in dealing with any accrued debts. (A recurring image is of Ariel sleeping in some uncomfortable room of his own house because the girlfriend and the girlfriend’s friends are using all the bedrooms.)

The notary has a plan to balance the debts: sell off the cattle to satisfy the debt holders. And maybe sell some of the land. Of course, that’s not going to leave Ariel anything to live on.

Initially, Ariel tries to ignore all of this, and throws himself into local student politics. Unfortunately, the activists are a useless crowd, and only want to volunteer to organize parties, while jobs like going out for food donations or cleaning the washroom facilities go unfilled. What the students lack in ideological grounding, they make up for in intoxication. Also: the one student Ariel kinda has the hots for has friendzoned him and that kinda makes him not want to hang around.

Ariel eventually gets himself sent as the student delegate to a hunger-striking meat packing union in the middle of difficult contract negotiations. The meat-packers have lost morale, and are starting to give up. There’s a long scene where they’re all gathered around the TV watching a lacklustre debate between the capitalist meat-packing plant owner and the union rep about the role of workers and people and why companies can’t expect workers to accept pay cuts if the company isn’t also giving out extra during the highly profitable years. But it’s painful to watch. Especially when the union dude pulls out his guitar and tries to channel his key points in the form of song.

Ironically, Ariel is briefly on TV when a news segment about the hunger strike airs, and the students suddenly want to hang out with him again. It’s also his ticket out of the friendzone.

And then, in the final part of the film, the notary gets Ariel to join the ranch hands in rounding up the cattle for sale. As he’s out working with the ranch hands (who haven’t been paid in 6 months), they get a bit drunk one night, and get a bit scary: burning him with the branding iron and threatening to shoot him. In their minds, he’s a bit useless, like bosses are always useless. But without satisfyingly resolving that conflict, the film continues on. The cattle gets to the meat-packing plant, where he’s signing off on the sale. “Look,” a worker says. “It’s your friend from the hunger strike.” The moment is interestingly filmed: Ariel is high above the workers, looking down. He’s signing documents; they’re moving cattle.

So, I have two problems with the film. First, it’s plodding. Sometimes I think there’s deeper meaning that I’m meant to perceive in certain slow, slow scenes, but that deeper meaning isn’t well-communicated. For example, when Ariel first arrives in Salto, he notices an older man walking down by the water. The old man eventually boards a water ferry and the water ferry drives away. We spend minutes on this scene. Since we know that his father’s died, it’s tempting to view the scene as a classical allusion of his father crossing the river Styx, but I kinda felt that maybe I was reaching a bit to find meaning in that scene. But then, why the scene? We never return to it. What role is it playing?

Ariel, himself, is often just observing stuff, seldom taking charge or exercising agency. Perhaps the death of his father has affected his ability to be an active agent in the film, but as a result, he’s not a terribly interesting protagonist.

My second concern is that is seems like the message of the film is, “…and when I grew up, I put aside childish things.” By that, I mean that I think the film is arguing that the kind of solidarity-based activism that made up a big part of his life was childish. Certainly I felt like the film was reinforcing that reading. The Salto students are unlikeable. The meat-packers seem barely functional as a union, even if there’s a core of old-timers that Ariel connects with. But that moment toward the end creates a sense of real distance between Ariel and his comrades from the meat-packing union. Ariel, the film seems to be telling us, is meant to be a boss, and the sooner he figures out how to look out for number one, the better. It also seems like the film is saying that, in a crisis, (whether it be a financial crisis or the death of a father), the people who will help you are family friends, not unions or activists or people who put you in the friendzone. And I’m not sure I’m really okay with that message.

The TIFF description ends with these words: “By The Militant‘s poetic resolution, we know we have sensed a true coming-of-age story, and that whatever path Ariel chooses, he will follow it with conviction and a deeper understanding of life.” Get it? You can’t expect a deep understanding of life by engaging in activism!