September 15, 2013 BC Holmes Uncategorized No comments

I mentioned in a quick post the other day that iNumber Number has taken the spot as my favourite film of the festival. I see a lot of very serious films at TIFF each year: documentaries about sober and sometimes sombre subjects and sad dramas. But iNumber Number is just all-out-action in the form of a heist film.

The (South African) director let us know before the screening that he gets a lot of questions about the title: apparently when speakers of the Zulu language adopt new words into the language, they put the letter ‘i’ in front of the word. Thus ‘iNumber’ (pronounced “e-number”) is the Zulu word for number, much as iRobot and iCar are the Zulu words for robot and car. (One might guess that iPhone is the Zulu word for phone; that wasn’t an example he used, though) More to the point, though, “iNumber Number” is underworld slang for heist — kinda like, “we got a smash and grab number going down this week.” 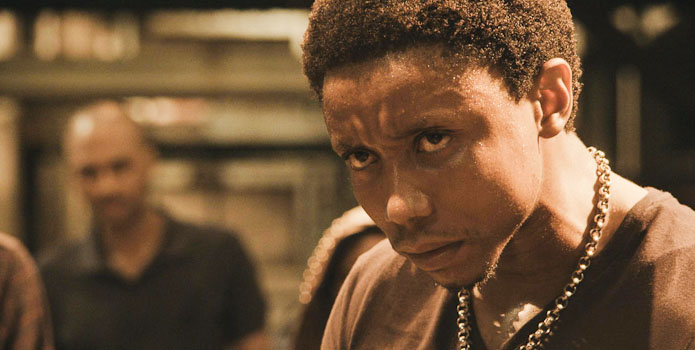 iNumber Number begins with two cops, Chili and Shoes who work in Soweto. Chili specializes in undercover work. At the start of the film, Chili has been captured (presumably by a gang he was infiltrating), but craftily overpowers his guard and phones Shoes to come to the gang headquarters building to help him. Shoes arrives and, by peering in the windows from the outside, is able to give Chili information about each threat in the building, a la, “Now the guy with the Glock is coming down the hall. He’ll be at the door in three… two… one…”

It’s established that Chili really wants to take some of them alive because he’s interested in a sizable reward that’s available if there’s a conviction. And together, they succeed. It sets the tone for the rest of the film that the movie starts with this wonderfully tense stand-off as Chili and Shoes work together to take down a whole gang. They’re working against impossible odds: Chili starts with a gun with only two bullets and Shoes only has a billy club, but they manage to succeed through carefully working together. And the film never stretches credulity to the point that it breaks.

After they take down the gang and we have some delightful opening credits (which includes wonderful Norman McLaren-esque stop-motion animation) we have a brief scene at the police station in which we learn that their superior officer is refusing to fill out the paperwork to allow them to collect the reward. Apparently he things that they’re not team players. And that gets Chili wondering why he’s the only cop who seems to play by any rules.

Some time later, Chili has infiltrated a group of criminals planning an armoured car heist, and he takes Shoes aside and says, basically, what if we just went along with this one heist and get something for ourselves. Shoes is the more straight-and-narrow kind of cop, and he’s like, “it’s a slippery slope; it’s never just one time.” But he agrees to help.

And pretty much from that point onward, the whole film is all tension, all the time. The criminal team includes a bunch of toughs with names like Skroef, G8 and Cheesegirl, and they’re not the kind of folks you double-cross. Shoes gets himself captured by Skroef who correctly surmises that Shoes is a cop working with an informant in the team. Can Chili diffuse the suspicion, go ahead with the heist, get his cut, save Shoes and escape clean? It seems like a tall order, and the latter two thirds of the film have you sitting on the edge of your seat the whole way.

It’s interestingly a low-budget indie film. The director said, in the Q&A afterward, that they were planning exactly how many blanks the actors could afford to shoot in any given shot. The TIFF write-up of the film says that the primary language is Zulu but the director corrected that: although seven or eight different languages are spoken in the film, the majority of the film is in Tsotsitaal. The action and stunts of the film are even more impressive given how constrained the budget was.

I can’t say enough good things about this film. It kept me rapt for its entire showing time. As a Serious Film Connoisseur™, I shouldn’t be as gushing as I am about this obvious genre film, but I just loved it.