Genealogy is just Databases, no?

I’ve encountered my first big mystery in the genealogy research. I do a few things as I digitize the research. I scan the pages — mostly, these pages are divided up into main family lines. Then I try to transcribe the large number of charts into a software product called MacFamilyTree, and that tool has some synchronization capabilities with a website called FamilySearch.org (run, as most of these sites are, by the LDS).

Genealogy websites are, basically, databases. And I understand databases. But I also understand that trying to decide that two records really are the “same” person requires a certain amount of human interpretation.

Here’s the sort of chart that’s typical of my grandfather’s research: 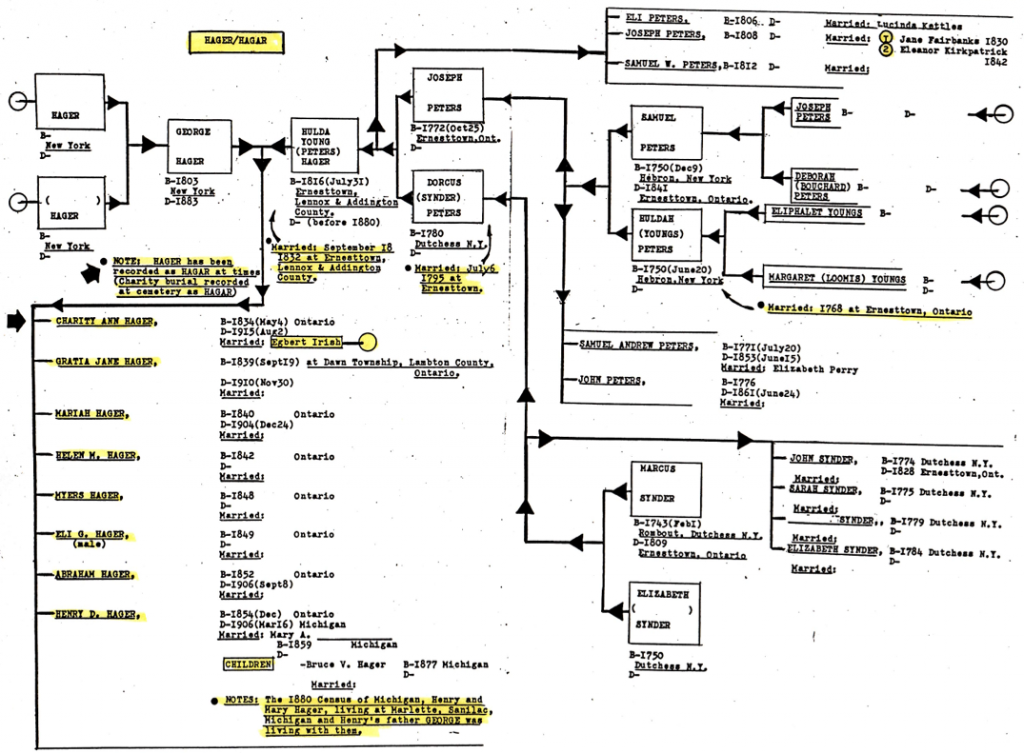 The Hagers/Hagars are not a major subtree in this part of the family — in this case, these charts come from the Dynes book, which is the family of my mother’s biological father (but not the grandfather who compiled the research — that’d be my mother’s step-father).

This particular chart is from a sideline of the family that splits off from my direct ancestors a large number of generations ago. The mystery involves some of the names in the upper right and upper middle part: specifically Joseph Peters who married Dorcus Snyder/Snider (whose middle name, niftily, appears to be Watchman).

Dorcus Snyder/Snider is an easy name to find, and FamilySearch.org has records of Dorcus and Joseph Peters. But that database has Joseph Peters born 1770, son of John Peters and Ann (Barnett) Peters. And there is kerfuffle. A number of genealogists have chimed in to say that, no, Joseph Peters (son of John Peters and Ann Peters) married Jemima Smith, and who is this Dorcus Watchman Snyder that’s credited with being the mother of Jemima’s children? Other people write back to say “that’s what it says in Ancestry.com, and I read all of those records, so it must be true!” Because databases!

Unfortunately, my grandfather’s material doesn’t seem to have any supporting documents for the Peters or Hagar lines (I presume because they’re so far off the main line). So I can’t really point to anything that substantiates, for example, the birthdate that he cites for Joseph Smith.

I can make speculations, of course. It seems much more likely to me that a Joseph Peters whose mother was named Huldah Peters (née Youngs) (which I think is a typo for Hulda Young, which matches FamilySearch.org) also had a daughter named Hulda Young Peters. I’m relatively confident that there were just two Joseph Peters, born around the same time, whom someone conflated in research some time ago and that conflation has developed a life of its own. But I don’t have sources.

Now, Dorcus Watchman Snyder/Snider is not a terribly common name, and if you Google it, you can find other people’s genealogy research. For example, there’s another Torontonian who has his own genealogy research posted on the web. He has over 100K records, including one for “my” Joseph Peters. I’ve fired off some emails to him and some of the email addresses he cites as sources to see if they have more information.