September 19, 2012 BC Holmes Uncategorized No comments

So I finally caught the series, Hit and Miss. In it, Chloe Sevigny plays Mia, a pre-op trans woman who happens to be a professional killer. So we’re automatically in trope territory (trans people are PSYCHO KILLERS!) But, hey, I’m willing to give any show that has a trans main character a bit of leeway.

Let’s get the obvious stuff out of the way, first. Our trans main character isn’t played by an actual trans person. We’re still not there. And the killer trope. I confess that I have a fondness for stories involving professional killers (Leon and La Femme Nikita and Colombiana and The Mechanic and Grosse Pointe Blank, to name but a few). Mia isn’t Buffalo Bill or Myra Breckenridge or “Bobbi” — she’s not psychopathic. For her, it’s a job. Which, admittedly, requires deadened empathy, but whatever. I was willing to just roll with that part of the show, despite the trope.

(In contrast, I recently watched the series, Wallander, and they’ve got an evil killer trans woman story, and I was totally not willing to roll with that one.) 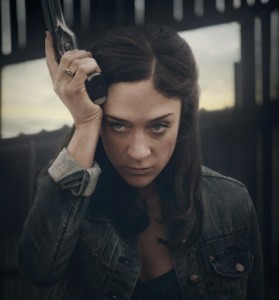 Near the beginning of the first episode, Mia gets a letter from her ex, who we quickly learn has passed away. We also learn that, prior to her transition (and unknown to her) she fathered a child. She pops up to Yorkshire, where she find her son living with a gaggle of step-siblings — they’re sort of living in a farmhouse in Yorkshire without any real adult supervision. So Mia starts trying to figure out how to forge a relationship with them. She comes out pretty quickly about the trans thing (but not the professional killer thing). The kids — especially the older teenagers — think she’s a bit of a freak, but barely tolerate her presence.

And to be honest, I found this part of the storyline kinda uninteresting. I don’t know what it says about me, but I wanted to watch her go kill people more than I wanted to watch her bond with the various kids. When she was killing people, she was showing skill and cleverness and determination. When she was interacting with the kids, she was angsty and trying to be accepted, and I’m kind of tired of that. And she gets all self-loathe-y at points in the show. Meh.

In some ways, I’m a bit surprised about what I didn’t get into in the show. There’s a whole subplot about her getting into a relationship with a local guy, and how outing herself as trans affects that relationship. Intellectually, I was all, like, “yeah, trans people! Being sexual beings! Without being vampish decepticons! Woohoo!” But viscerally, I was, like, “WhatEVER!”

I also thought that the show became too obsessed with showing Mia’s penis. It’s a 6-episode series, and I think we see her penis in every episode. In the first episode, her stripping down is our first introduction to the fact that she’s trans (although obviously that was the heavily advertised aspect of the show). Me, I thought: Okay. That’s one way to spell out her gender. It wasn’t lost on me that it also spelled out her genital status. (I know that you cis people find it REALLY IMPORTANT to know trans people’s genital status at all time). But I think her nakedness was waaaaaaay overused.

And I felt like they tried to cram too many Very Important Trans Moments of Fiction into the six episodes. We’ve got the “I have a kid?” moment. The “I’m in a relationship; when do I mention the gender thing?” moment. The “Someone walks in on me naked” moment. The “I’m meeting my long-estranged family members” moment. The “Bullying” moment. The “Sad: I’m never going to give birth” moment. And so forth. I think that they could have trimmed down the list to a more manageable number of angst-inducing scenarios. Also: I think I would have loved it if Mia could have had a sense of humour.

I suppose I was glad to have watched it. But now I just want to write my own trans professional killer fiction and make it exactly what I want it to be.