The Chronicles of Madison

June 9, 2012 BC Holmes Uncategorized No comments 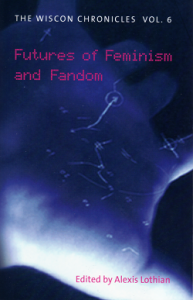 One of the things that was especially exciting about this year’s WisCon was the opportunity to get my hands on a copy of this year’s WisCon Chronicles. And it’s all about vanity, I admit: I have an essay in the book about the way panels over the last few cons have struggled with talking about class.

There are a few other really good pieces in this year’s book. I think that the most powerful piece is probably Ian Hagemann’s and Nalo Hopkinson’s exchange on the Carl Brandon Society and Ian’s falling-out with them over the Octavia Butler Scholarship. As I said in another forum, it’s hard to talk about this piece because while I greatly respect and admire what the Carl Brandon Society does and want to be the kind of ally who will defend it against those who would attack it, I’ve also been a friend of Ian Hagemann for many, many years and I understand his pain and anger about the incident he describes.

I’ll also point out the really good piece by Liz Henry about using Pattern Language to break through tech people’s aversion to learning about feminism and the way that they might perpetuate the locking of the clubhouse. The piece is called “How to Suppress Women’s Coding” — a title that clearly derives from Joanna Russ’ “How to Suppress Women’s Writing.”

I also, obviously, need to point to Chris Wrdnrd’s and Jess Adams’ essay, “Dennis & his posse are done with your wealthsplainin'” — the essay that lays out the genesis of their Friends of Dennis site (I can hear you thinking, “Who’s Dennis?” Hint: the web site answers this for you.)

And Skud also has a good essay that really crystallized for me a key tension in the fannish world:

There is a lot of discussion about these “sides” of fandom, though perhaps “sides” is a more divisive word than necessary. Suffice it to say that there are many different ways of doing fandom, and the two main clusters of behaviour and affinity that we saw at that time were, firstly, an author-centric area of fandom, which was most often referred to as “literary sf fandom” or “book fandom” and, secondly, a LiveJournal-based group, largely pseudonymous, that was often referred to as “media fandom.”

I consider myself firmly a part of that second group. Not because I am particularly into “media” (actually, television and movies) as the name “media fandom” implies, but because, first of all, it’s a primarily female and notably queer-friendly community, and second, because I am always drawn to decentralized, non-hierarchical, grassroots communities, especially those that make things and give them away for free.

As I said, the essay gave me an excellent ah-ha moment.

I really admire the range of pieces that editor Alexis Lothian brought together in this book. And speaking as a writer being edited by Alexis, it was an all-around pleasure working with her.

It’s also true that every year my respect for Aqueduct Press grows and grows. Not only do they publish the annual WisCon Chronicles, but they’ve published Tiptree-award-winning books like, Filter House and Redwood and Wildfire. They’re a pretty important publisher, and it’s a little sad that their books are a touch hard to find (but you can buy them from their web site!)

Anyway: it’s been a great year for the WisCon Chronicles: I highly recommend the book!